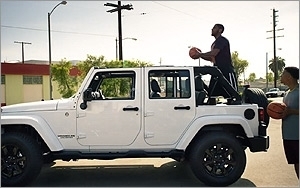 Chrysler Group’s Jeep brand is going for a swish with its summer volume sell-down through a campaign featuring U.S.A. Basketball Team point guard Kyrie Irving. First appearing in the campaign in spring this year, he is now part of an experiential program for the brand in major markets.

The "Summer Celebration" campaign has a two-pronged timing tactic: it is during the critical part of the year when people charge the dealer courts (hopefully) to get a good deal on a car, and automakers try to lower inventory to make room for new vehicles; and the USA Basketball team is heading to play in the 2014 FIBA Basketball World Cup.

On that day, the automaker will tie it together at the South Street Seaport in New York with a grassroots event, the Jeep “Open Air Challenge” where people have a chance to take on Irving in hoops, and visitors have a chance to win tickets to the U.S.A. vs. Puerto Rico exhibition game on Friday at Madison Square Garden.

The New York event is part of a nationwide "Open Air Challenge" schedule, where regular people get to go up against stars of the court, per the company. In Chicago this past Friday, members of the Jalen Rose Leadership Academy got to play against former NBA star Rose and Irving.

The challenge has Irving taking shots from the back of a Jeep Wrangler Altitude Edition, with students and fans shooting from the free throw line.

The operation mirrors what Irving did in a TV spot that was part of the summer campaign kickoff in May, which touts the Wrangler's open-air Altitude trim. In one of three ads, all of which have Michael Jackson's "Love Never Felt So Good" as backing track, Irving rolls up to a pickup basketball game in his Altitude Jeep, and after making shots the usual way, swishes the hoop from the car. Chrysler Group brand was able to use the song via an agreement with Epic Records.

Custom content is on the summer campaign microsite, which is also home base for a social program dangling a Wrangler Altitude and other prizes. Through Sept. 5, people can upload a summer photo moment using the #jeepsummer hashtag on Instagram. For each photo uploaded with the designated hashtag via Instagram, the Jeep brand will donate $1 to the USO.