'Cherish' Is The Word I Use To Describe This 'Comeback' Finale 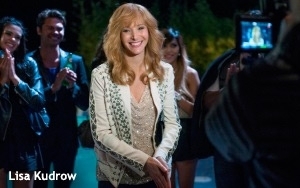 “The Comeback” has been reported to be the lowest-rated comedy series in the history of HBO, so it stands to reason that relatively few people will make it a point to watch the one-hour season finale of this show on Sunday night (Dec. 28) on HBO (10 p.m. Eastern/9 Central).

That’s too bad for them, because they will miss something special. I know this because I’ve seen the show, thanks to HBO, which took the unusual step of providing this finale episode to TV columnists in advance of its air date -- something HBO rarely does for finales.

The last thing I would want to do is to spoil this experience for anyone who might now plan to watch it, but the way this episode ended came as a complete surprise to me. To tell you how would be to give away too much.

I will say this, at the risk of repeating what I wrote in another blog post about “The Comeback” when the new season began in October -- full credit for this ending, and the entire episode that precedes it, goes to Lisa Kudrow. Her portrayal of this complex character, Valerie Cherish -- an aging TV actress trying to claw her way back to the top of her profession -- is nothing short of astonishing.

It spoils nothing about the finale to set the scene. As anyone knows who has watched the previous episodes of “The Comeback” this season (yes, there are some of you), Valerie has been nominated for a Best Actress Emmy, for a fictional HBO comedy series called “Seeing Red.” The series is a behind-the-scenes comedy based loosely on a fictional network sitcom in which Valerie once starred 10 years earlier (a show that was the subject of the first season of “The Comeback” in 2005).

In this Sunday’s finale, Emmy night has arrived, and Valerie’s preparations for the event form the basis for most of the episode -- including a catastrophic plumbing breakdown that almost wrecks her home. Real-life guest stars include Conan O’Brien as the host of this fictional Emmy telecast, celebrity stylist Brad Goreski and long-time sitcom director and producer James Burrows, who gives Valerie some timely advice.

Also look for standout performances by Brian George, who famously played the hapless Pakistani restaurateur named Babu on “Seinfeld,” and Robert Michael Morris as Valerie’s long-time hair-and-makeup man Mickey Deane, a character almost as painfully true-to-life as Valerie. Also listen for the 1966 song “Cherish” by the Association, music whose use on this show has been long overdue.

In one exceptional scene, Valerie is seen alone, late at night in her kitchen, snacking compulsively on junk food as she rehearses an imaginary acceptance speech for the Emmys the following evening. The scene is sweet, needy and pathetic all at the same time -- just like Valerie. Cherish it.

The second-season finale of “The Comeback” airs Sunday night, Dec. 28, at 10 p.m. Eastern/9 Central on HBO.