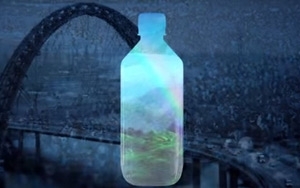 Fiji Water, the leading imported bottled water brand in the U.S., is launching the first television campaign in its nearly 20-year history.

Budgeted for $30 million, the "Untouched" campaign will air on network and cable throughout 2015, and also represents Fiji Water's largest marketing investment to date, according to the brand.

It consists of four, 15-second spots that stress that the artesian water, sourced from the Fiji island of Viti Levu, is "created entirely by nature," and claims that it is "the best water known to man, because he had nothing to do with it." The brand's trademarked tagline is "Earth's Finest Water."

The creative features a transparent bottle — within which we see waterfalls, mountains and other scenes from Fiji's landscape —superimposed over images of gritty, polluted-looking urban scenes.

The spots were produced by Elastic, the team that created the title sequence for "True Detective."

The campaign will also include digital and social media, FSIs, in–store promotion, public relations and events.

"As we continue our growth trajectory, we wanted to reintroduce the brand more broadly to consumers," said Clarence Chia, VP of marketing for Fiji Water.

In 2006, Fiji Water created controversy on the marketing front by running a full-page ad in magazines headlined "The label says Fiji because it's not bottled in Cleveland."

Angry Cleveland authorities had the water tested, and reported that Fiji Water contained 6.31 micrograms of arsenic per liter, whereas the city's tap water, and other bottled brands including Evian, Dasani and Aquafina, contained none. Fiji Water said the campaign was only meant as a joke, and that its own analyses show that the water's arsenic level never exceeds 2 micrograms. The FDA allows up to 10 micrograms per liter.

Bottled water and the companies that market it continue to draw environmental criticism. Fiji Water — a favorite of celebrities, affluent consumers and upscale restaurants — has also come in for criticism over the years for reaping profits by exporting clean aquifer water from a developing country that is still struggling to provide its residents with a clean water supply.

In 2007, the brand established a foundation to provide clean water access, healthcare and schools for rural communities in Fiji; it also has a partnership with the environmental organization Conservation International.