Entertainer In Chief Obama Was A Regular Riot On 'Kimmel' 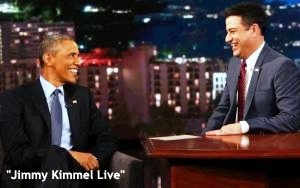 Fun-loving President of the United States Barack Obama joked about outer-space aliens, revealed that he does not visit the White House kitchen late at night in his underwear for a snack, and refuted Kanye West’s claim that the two have talked on the phone.

The good-natured leader of the free world made these comments and others on “Jimmy Kimmel Live” last Thursday night, the president’s first visit to a late-night comedy show since way back in December when he was last seen on “The Colbert Report.”

Like that performance, the self-styled “comedian in chief” knocked it out of the park on “Kimmel” as he fielded a series of off-the-wall questions from his awestruck host.

“If I was the President,” Kimmel, said, “and it’s unlikely that is ever going to happen -- the moment I was inaugurated, my hand would still be hot from touching the Bible, and I would immediately race to wherever they have the files about Area 51 and the UFOs and I would go through everything to find out what happened. Did you do that?”

To which President Obama responded: “That’s why you will not be President because that’s the first thing that you would do!” He then joked: “The aliens won’t let that happen … they exercise strict control over us!”

Kimmel also asked the President if he ever drives (the answer was no), how presidential dental appointments are handled (there’s a fully equipped dental office within the White House), and if the President ever texts. On this last subject, President Obama said no -- mainly for reasons of security. In fact, he said, he still has a BlackBerry.

Kimmel asked the President if he had Hillary Clinton’s e-mail address and Obama indicated that he did. He declined to share it with Kimmel, however.

Brandishing a receipt from CVS that was nearly two feet long, Jimmy asked the President to join him in his fight for shorter receipts from retailers. Deftly sidestepping this hot-button issue, the President made no commitment to this cause and, after examining the document for a few seconds, declared his approval for a discount on batteries that he noticed near the end of it.

President Obama even agreed to participate in a recurring “Kimmel” show bit in which celebrities read “mean” Tweets about themselves aloud. In so doing, the president joined a roster of fellow celebrities who previously participated in the “mean Tweets” feature such as Gwyneth Paltrow, Lena Dunham, Britney Spears, Ashton Kutcher, Mindy Kaling, Matthew McConaughey, Sofia Vergara, Katy Perry and many others.

One of the Tweets recited by the President: “Is there any way we could fly Obama to some golf course halfway around the world and just leave him there?”

“I think that’s a great idea!” the President said about that one.

On the former subject, the President expressed his sympathy for the two police officers who had been shot earlier that same day in Ferguson, Mo. Kimmel also praised the speech the President made March 7 in Selma, Ala. to mark the 50th anniversary of the famed civil rights march there.

On the topic of student loans, the President promoted his “student loan bill of rights” proposal that he first made two days earlier in a speech at Georgia Tech.

Was the President’s appearance on “Kimmel” a success? That depends on how success is measured for such things.

For example, a critic could offer his opinion that no matter how much fun appearing on a late-night comedy show might be, the President of the United States demeans and diminishes the stature and prestige of his office when he goes on a late-night comedy show to joke about UFOs and participate in comedy bits that put him on par with sitcom actors and pop stars. However, this opinion doesn’t seem to be as popular as it once was.

More potent than the ravings of a critic is the “YouTube metric,” in which “success” is measured in page visits and “likes” and “dislikes.” In this, the President’s “Mean Tweets” bit would appear to be a hit. As of 11 a.m. Monday morning, the video of this bit on YouTube had more than 16.6 million views and it was continuing to grow. It had 87,000 likes and 3,000 dislikes.

The President wins, by a landslide.