Ram Back As Official Truck Of The Kentucky Derby 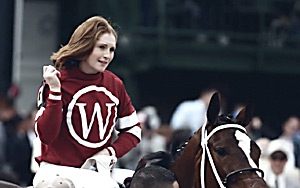 Ram Trucks -- back for the sixth year as Official Truck of Churchill Downs and the Kentucky Derby -- will be doing a comprehensive campaign around the race, including advertising during the May 2 telecast on NBC, and a strong presence on the ground at the race.

The second ad to air during the race is a 30-second spot that talks about Ram's growth spurt that started in 2009. The theme is that Ram isn’t in the flock of sheep. It opens with sheep herded by a dog, who then runs to the top of the hill to survey the flock. A lone sheep then breaks free from the pack and makes its way to the top of the hill and takes a leadership position siting down by the dog. Elliott’s voiceover: “The ones with the guts to stand apart — join a league of their own. More people are driving Ram trucks than ever before. Guts. Glory. Ram.” Dallas-based The Richards Group handles Ram creative duties.

Ram will air additional spots in the television broadcast, as well as print and digital advertising promoting its sponsorship and Official Truck status of the Downs and the Derby, per FCA. That began with a full-page print ad in the sports section of USA Today, Friday, May 1. The ad features an original illustration by equine artist Jamie Corum. His illustration for the ad features the new Ram 1500 Limited racing with the horses at Churchill Downs and the words “Official Truck of the Kentucky Derby.”

And at the Downs, Ram will have an array of branding, interactive exhibits and vehicle displays. In addition to its truck lineup, the brand will have video board integrations, posters, backside and trackside signage throughout the grounds, and branding on gate crew staff uniforms. Ram ProMaster and ProMaster City vans will transport the Derby’s traditional “Garland of Roses” to Churchill Downs Saturday morning.

And a Ram brand representative will present the winning trophy to the owner and jockey of the American Turf race on Kentucky Derby Day.