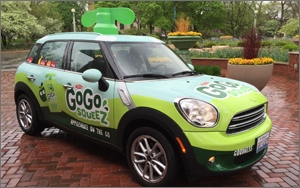 GoGo squeeZ, the lines of squeezable applesauces and fruit-and-veggies in resealable pouches, continues to expand its marketing, along with its production capacity and sales, in the U.S.

Last year, the brand ran its first campaign in national media, including TV spots and magazine ads. Those were timed to help support a day-long event in January, dubbed "Play Day," during which brand ambassadors offered family activities and product samples in 11 cities. Families around the country were offered coupons for booking their own play dates on a dedicated site.

This year's expanded, $12-million campaign began with television, print and digital ads that ran through the first quarter. It will continue with a three-month tour spanning about a dozen markets around the country.

The new campaign, "Goodness on the Go," builds on last year's. This time, the messaging emphasis has been shifted toward the products' benefits as natural, healthy snacks that can go anywhere, whereas last year's "Awesome Sauce" theme put more stress on the products being fun and delicious (as well as natural) enhancements to active play time.

"Research shows that more than half of American consumers eat a lot of snacks on the run," but many feel that there are few healthy portable options, says Jeannette Cornell, VP of brand management and communications for GoGo squeeZ. The brand's own research and feedback in the marketplace confirm that consumers' most-cited reason for buying its products is that they're "all-natural" portable options that "they feel good about giving the family," she says.

In addition to updating its TV, digital and print creative with the "Goodness on the Go" messaging and running FSI coupons, GoGo squeeZ has been using public relations and social media "influencers," Cornell reports. This year's print ads ran in Real Simple, Parents, People, Women’s Health and Shape.

The market stops include New York City, Dallas/Ft. Worth, Miami, Los Angeles, Atlanta, San Francisco, Seattle, Chicago, Minneapolis/St. Paul, and Denver. In addition, there will be visits to Bentonville, Ark., to participate in Wal-Mart's annual associates' fair; to its plant in Traverse City, Mich. (set up in 2011 through a partnership with Cherry Growers, Inc.); and to Idaho, to visit its second plant, opened last year in Nampa, and the Boise headquarters of the Albertson's grocery chain.

In addition, there will be three events featuring a novel vending machine, dubbed a "Goodness Machine." Press a button, and the GoGo squeeZ-branded machine, designed by a former NASA engineer, ejects a product pouch into the air, which glides on a parachute down into the hands of the waiting consumer.

The three Goodness Machine events will take place in highly trafficked venues: New York's Madison Square Park on July 23; Mall of America in Bloomington, Minn., on Aug. 1; and The Grove in L.A. on Aug. 6.

The brand will use its Facebook, Twitter and Instagram channels to promote the tour, encouraging fans to spot and take snaps of the GoGo Karts and post them, using #ISpyGoGo, for chances to win prizes and have their photos featured on the brand's site.

Between its U.S. launch in 2008 and 2012, GoGo squeeZ helped create and drive the squeezable fruits category, growing to more than $100 million in U.S. sales. The rapidly growing category has inspired an expanding number of competitors, including J.M. Smucker's Fruit-Fulls, launched last summer.

GoGo squeeZ is owned by a division of France's privately owned Groupe Mom-Materne Mont Blanc, which launched resealable fruit pouches in Europe in 1998, turning them into a major global business. Materne is projected to realize EBITDA of about 100 million euros in 2015, according to a recent Bloomberg report.