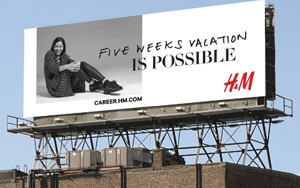 H&M is looking for a few thousand good Millennials, debuting its first-ever national recruiting campaign. Ads highlight its commitment to sustainability and progressive promotion policies, in hopes of further distinguishing the Swedish cheap-chic chain from the fast-growing competitive field.

Called “Place of Possible,” the campaign is using outdoor ads as well as online videos starring 50 H&M employees talking up the company’s benefits, above-minimum-wage pay, diversity and sustainability philosophy. It follows announcements to rapidly expand its store presence in the U.S. Plans also call for a college tour — staged in a H&M Airstream — emphasizing the company as a place to advance a career.

While the company isn’t saying exactly how many people it intends to hire, last year it opened 62 U.S. stores, adding 2,800 new jobs. This year, it intends to open 61 more, including a massive flagship in New York’s Herald Square, which it says will be the largest H&M in the world when it opens next week. And it estimates its annual expansion rate will range between 10% to 15%, bringing the American store count to more than 400, and its total store count to nearly 4,000.

But it’s not alone in its quest for fast-fashion domination. Spain’s Inditex, owner of such brands as Zara, owns more than 6,600 stores, and is also focusing on the U.S., with three new New York stores set to open this year. Britain’s Topshop is already in the midst of a U.S. expansion, and Japan’s Uniqlo, which has more than 1,500 stores, and 39 in the U.S., is opening new stores in Boston, Chicago, Denver and Washington, D.C.

"We are proud to launch the Place of Possible campaign because we believe the best investment we can make is in our employees," says Daniel Kulle, president of H&M North America, in its announcement. "H&M loves bringing fashion to the world and we need to find employees that want to join us in our journey."