In January, rumors surrounding Google’s entry into the auto insurance space ramped up significantly.  The company had provided auto insurance comparison shopping in the U.K. since 2012, so it was widely speculated that this service would eventually come to the U.S.

In March, Google launched the service in California, with 14 carriers participating.  Now, Google is up to 17 carriers but has not expanded to additional states.  The tech giant has licenses to sell auto insurance in 49 states plus the District of Columbia — but curiously does not have a license for Rhode Island.

Google has openly established that it is working with CoverHound to power this comparison engine.  Forrester suggested that Google might be buying the LA-based insurance solutions company, but this hasn’t transpired.  CoverHound isn’t shy about their relationship either, and recently raised $14 million in Series B financing.

The auto insurance industry is one of the search engine's most lucrative sources of income. How will it not kill the golden goose?  It’s clear that Google is sensitive to this issue, putting the comparison engine below the top two ad spots (Figure 1).  Examining the company’s roster of carriers, it’s evident that none of its major advertisers are participating.  When searching for a participating carrier, the comparison module goes away entirely (Figure 2). 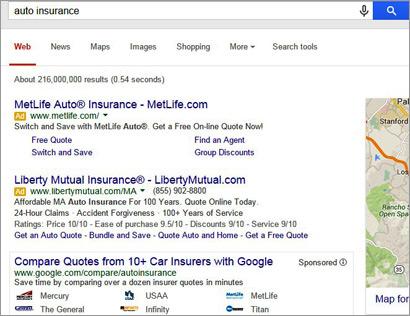 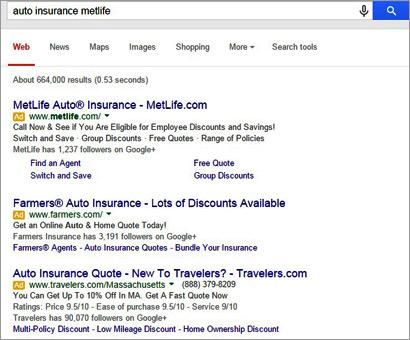 It appears that most of the larger carriers are happy to continue to use Google as an advertising platform and wait to see what happens with the comparison engine.  Google’s relatively methodical expansion since the launch in March would suggest that it can take its time figuring this out.

What this means for advertisers, search marketers and comparison sites remains to be seen.  Google still makes nearly all of its money in advertising.  And its comparison tools will likely be built around the products that drive the most advertising revenue.  Unlike organic content, which Google seems to appropriate in an effort to improve the user experience, Google’s own commerce efforts cannot interfere with its primary growth engine.

As always, pay close attention to what Google is doing with results pages for your top search categories.  Elements change every day, as evidenced today when ads on my search results pages only appeared at the top and bottom of the page.  As I put the finishing touches on the closing paragraph, ads on the right rail suddenly reappeared.