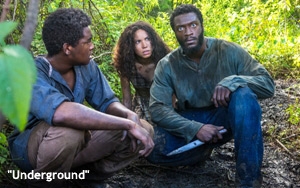 The one thing that is most tiresome about most TV shows is their predictability.

Watch enough TV -- or more than enough, as most of us have done in our lives -- and you develop instincts and perceptions that enable you to foresee what’s just around the corner. Generally speaking, plots don’t take unexpected twists and turns, and characters -- whether in dramas or comedies -- usually turn out to be exactly who you think they are.

So when a new show comes along that shatters all of these dreary expectations in the very first episode, then the instincts you have developed over so many years of watching television start to tell you something else -- that you are watching something special, new and different.

Such was the case when I watched the premiere episode of “Underground,” a new drama series premiering Wednesday night on WGN America. The show is about slavery in Georgia in 1857, and the attempts by some slaves to seek a path to freedom through the rumored “underground railroad.” This wasn’t a real “railroad,” of course, but a loosely aggregated -- and very secretive -- system of safe houses and hiding places positioned roughly on a line toward the north, and manned by sympathetic whites and free blacks, through which a runaway slave could theoretically find his or her way to a northern non-slave state.

The system was fraught with peril. Runaway slaves were not easy to hide, and this “underground” system was not easy to find -- much less adhere to through hundreds of miles to the north. Still, its existence gave some slaves hope, even when they had no more evidence than mere rumors to prove that it actually existed.

This is the backdrop for “Underground,” which takes place principally on a Georgia plantation three years before the onset of the Civil War. Among the executive producers of “Underground” is John Legend, who is credited with overseeing the music on the show, much of which is contemporary hip-hop.

The application of modern-day music to this 19th-century slavery story could have just been a gimmicky, needless distraction, but incredibly, it works. It is not at all overdone and it is applied only at certain times. But it has a way of humanizing these 19th-century characters and allows a viewer to observe their struggle for freedom through modern eyes -- bringing them closer, and out of the shadows of history.

But this is just one of this show’s surprises. The other one comes down to writing and storytelling. Often, but not every time, as soon as you think you’ve gotten to know a character, the story shows you that you have not. And at other times, when you think you know where the plot is going, it doesn’t go there.

A TV drama about slavery runs the risk of turning its characters into caricatures, and I suppose that for the sake of making this show accessible to a wide audience, there is some of that. But on all fronts, this show seems extraordinarily well-made -- from the settings and the casting (including Christopher Meloni as a small farmer and Reed Diamond as the plantation owner and, as slaves, Jurnee Smollett-Bell, Aldis Hodge and Mykelti Williamson) to the acting, writing and even the costuming.

While the content of this show does not rise to the horror of “12 Years a Slave,” that’s only because of the inherent differences between TV and movies. For a TV series, “Underground” doesn’t exactly shy away from the cruelty we associate with slavery, nor does it ban the n-word either. Instead, the word is used often in the casual, demeaning way one would expect it to have been used in the era depicted here.

With slavery as its subject, “Underground” is in many ways a brave show to put on TV. But if it was merely brave, it might not be compelling to watch. Instead, it’s more than just brave. It is a great TV show.