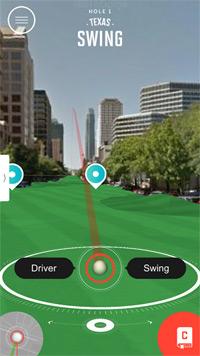 Austin has always felt like one of the main characters of South By Southwest, but this year attendees can see the city through a Dell-branded mobile app, which launched Monday on iOS and Android.

The move by Dell -- headquartered in Round Rock, Texas, just north of SXSW -- furthers the brand's content strategy in a big way.

Content will become a major focus for Dell in 2016; it provides answers and interactions rather than pushing unwanted information to consumers, according to Bryan Jones, VP, North America commercial marketing, who spoke to Mobile Marketing Daily during South By Southwest.

SXSW attendees this year can see the city by golfing through the streets of Austin with the mobile app Dell Play Through, powered by Intel. It's made possible with help from Y&R New York, technical assistance from sister agency VML and production by MediaMonks.

The golf app promotes the brand's sponsorship of the Match Play golf tournament, held March 23-27 in Austin. It lets players explore the city through a nine-hole golf course, laid out to include some of its landmarks, such as the Paramount Theater, Franklin BBQ and the Texas State Capitol.

The course was designed by Matt Ginella, travel and golf course expert for the Golf Channel. A Foursquare partnership provides details and ratings about some of the places the golfers pass along the way, such as monuments, restaurants and bars. It lets them save places as favorites.

The game takes the player through the city with a virtual street view that includes not just the famous spots, but every building that lines the course. The course includes holes with names like Stay Classy, Austin and Keep Hole 5 Weird. The first hole ends on the steps of the Driskill Hotel.

Mobile players select angles and irons based on their wind speed. Swipe the screen to strike a ball or physically swing the phone. They can even try to hit the ball over buildings to cut corners, but only if they want to risk a one-shot penalty for going out of bounds.

The app connects to Facebook so users can share their scores and challenge friends to a match.