Get Ready, ESports Is The Next Big Thing 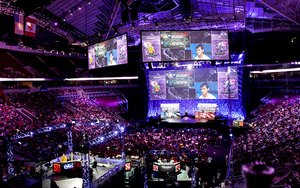 If you aren’t paying attention to competitive electronic gaming (otherwise known as eSports) right now, you will be soon.

According to a recent report from The NPD Group, nearly half (44%) of current gamers have watched either a formal eSports competition or some informal video streaming of gameplay in the past six months. Of those watchers, 18% are watching on a daily basis, and 46% are watching at least weekly (and spending nearly three hours on average per watching session).

“It’s surprising,” Liam Callahan, industry analyst at NPD, tells Marketing Daily, of the high levels of incidence and engagement. “It really speaks to how eSports is going to continue to grow.”

Considering its relative youth as an entertainment outlet, eSports will also grow as the competitive games attract bigger prize purses and player personalities begin to emerge, Callahan says. “[Soon], we’ll see more emphasis on the prize pool and a focus on the personalities,” he says. “We have yet to find the Michael Jordan of eSports.”

Like traditional sports, the world of eSports attracts viewers in part through the opportunity of watching highly skilled practitioners triumphing through a honed set of skills. The biggest difference is that many eSports watchers are also players and can pick up tips that they can use in their own game play, Callahan says.

“They really like watching to learn how to play the games for tips and tricks,” Callahan says. “I think some of these more transferable skills can really be a part of the appeal of eSports.”

Moreover, two-thirds of gamers say the game they’re watching others play is also the game they’re playing the most. A sizable number of gamers said they downloaded content or an entire game after watching someone play it online, opening a new opportunity for game marketers to get their products in the hands of consumers.

“That’s something these companies should be paying attention to when bringing a game to market,” Callahan says.