AT&T Customers Can Take Anyone They Want To Movies 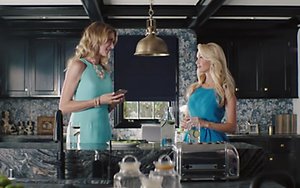 AT&T is looking to make the most of the summer blockbuster season and it’s newly launched “Thank You” loyalty program with new advertising showcasing just how easy it is to take anyone you want to a free movie.

Highlighting the program’s “Ticket Twosdays” promotion, the new ads show off different scenarios in which people invite others to a movie. In one ad, a man dials up a married friend with the movie offer.

Other spots in the campaign (from agency BBDO New York and Atlanta) include inviting a “sentimental friend,” who overreacts at every change in plans, and an awkward college student inviting his crush, only to be blocked by her hunky boyfriend.

The ads will run on TV, pre-roll and in cinema throughout the summer. The work will also be accompanied by digital and social elements.

AT&T launched its “Thanks” program in early June to help show some love for its current customers. In addition to the “Ticket Twosdays” promotion, other perks will include priority pre-sale access and exclusive experiences to Live Nation events and unique content for DirecTV subscribers.