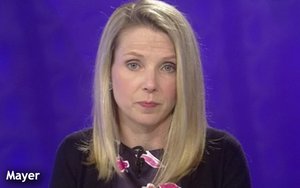 Like a broken record, Yahoo CEO Marissa Mayer opened the company's second-quarter earnings call Monday with a caveat that there is no news to report on the forthcoming sale of the company's core business assets, which includes search.

The remaining bidders are expected to include Verizon Communications, Dan Gilbert financed in part by Warren Buffett, and private-equity firm TPG, among others.

While Mayer did not delve into Yahoo's forthcoming sale, but she did confirm search partnerships with Apple, Bing, Google, Mozilla, and Oracle, among others. "We anticipate that much of the innovation in search will occur in what we call mobile assistance," she said, adding that Yahoo this quarter launched early tests of "conversational interfaces, personal assistance and real-time answers."

Yahoo reported that revenue has risen 5% to $1.3 billion. Display revenue and search revenue fell overall. The impact related to its Microsoft search partnership added $252 million to revenue, otherwise GAAP revenue would have been $1,055 million, down 15% from Q2 2015.

Revenue from Yahoo's financial metric called Mavens -- which tracks mobile, video, native and social ads -- rose 26% to $504 million. That compares with 6.8% in the first quarter, and 60% in the second quarter of 2015.

Ad agency Merkle said Yahoo began boosting its use of Google Shopping Ads in mid-March, while reducing the number of Bing Product Ads it serves. Yahoo.com accounted for nearly 40% of clicks on Bing Product Ads early in the first quarter. That rate suddenly dropped to roughly 25% in late March -- about the time Yahoo reported making the eleventh amendment to the Microsoft search agreement, which includes the change in revenue presentation.

Yahoo reported that the eleventh amendment took effect in the U.S., Canada and Europe on April 1, 2016 and in its remaining markets other than Taiwan and Hong Kong on June 1, 2016.

During the second quarter of 2016, Merkle reported that Bing Product Ad volume fell year-over-year for the second quarter for the first time since the format’s launch. Simultaneously, share of Google product listing ad (PLA) traffic produced by Google search partners on desktop rose from 3% to start the year to 14% in June.

Google desktop text ads have also seen partner share rise from 14% to start the year to 17% at the end of the second quarter -- the highest rate it has been in the last 18 months, after steady declines until mid-March.