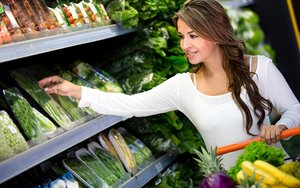 Sure, Americans head to Costco some days, drop by the dollar store another, and sometimes swing by their neighborhood grocer too. But that doesn’t mean they’re happy about all that running around, and Progressive Grocer’s new annual report finds that many feel forced to make multiple trips to find everything they want.

And whether shoppers are looking for deals, quality or variety, supermarkets continue to be on the losing end, with their share of total grocery spending — about $2 trillion each year — falling to 54.5%. That means their slice of the grocery pie has fallen more than six percentage points since 2007. Warehouse clubs and supercenters continue to be the big winners, with their combined share rising from 25.1% in 2007 to 31.3%.

The report says that in efforts to differentiate themselves from competitors, stores have some consumers longing for the days when they really could do one-stop shopping. “Shoppers don’t conscientiously define which channel they want to shop — they’re just going where the products they want are available,” says Meg Major, the magazine’schief content editor, in its report. “Supermarkets are in direct competition with every retail channel, including restaurants and subscription services like Blue Apron."

Traditional supermarkets are fighting back. And population shifts, with 80% of the population now considered urban, “the growing adoption of healthier eating, and a willingness to experiment with new formats, footprints and e-commerce solutions” are all in their favor. “Retailers have hardly given up the fight.”

Neither has any other channel. In a big flex away from its value positioning, Walmart, for example, recently opened its Culinary & Innovation Center, where it will “test, taste and develop new branded and private label food products,” writes Phil Lempert, industry expert, in a recent post at his Supermarket Guru. The small facility is showing industry insiders quite a range of products: Fried Hostess Twinkies, fancy exclusives such as Trouble Brewing Co. beers and higher-end cheeses, and Street Kitchen brand meal-kits, which include measured marinades and spices for three-step meals.

Progressive Grocer says consumers are stepping up spending on fresh foods and stores that offer convenience, spending more than half of the family food budget in the perimeter of the store, and fresh categories. And spending on health and wellness items, beauty products and alcoholic beverages are all strong, registering bigger-than-average increases.

The magazine reports that food spending amounts to 13% of all consumer expenditures in the U.S., with food eaten at home accounting for 7.8%, and food consumed away from home taking 5.1%.