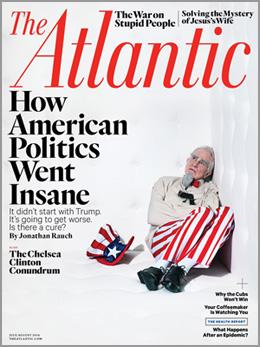 The Atlantic will print an additional 25,000 copies of its July/August issue in order to “meet newsstand demand,” the first time in the nearly 160-year-old magazine’s modern history to order a second print run, the company announced today.

The cover story, “How American Politics Went Insane,” is likely the reason for the issue’s success.

The issue is poised to become the magazine’s best-selling issue since 2008.

An Atlantic spokesperson told Publishers Daily that the magazine's top-performing covers of the year have been focused on politics, thanks in part, to the magazine's “renewed emphasis on politics in this fascinating year,” stated Bob Cohn, The Atlantic’s president.

Since January, The Atlantic expanded its “Politics & Policy” coverage and tripled the size of its political reporting team.

“At a time of troubling newsstand performance for many magazines, it was kind of thrilling to order up a second printing for this issue,” Cohn stated.

According to figures from MagNet in June, newsstand sales of consumer magazines continued to decline in the beginning of 2016.