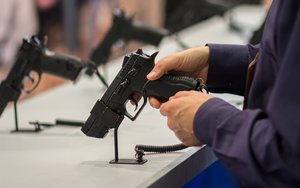 Smith & Wesson Holding Corp. — the parent of the well-known firearms brand — is looking to change its name to American Outdoor Brands Corp. to express its broader portfolio of products beyond its well-known guns.

Still subject to approval by the company’s board, the move would involve changing the brand’s stock ticker from SWHC to AOBC. The move is designed to reflect the company’s expansion into a broader portfolio of outdoor products, which include hunting knives, sports gear and flashlights.

"By executing on our strategy to be a leader in the shooting, hunting, and rugged outdoor enthusiast markets, we have successfully grown from a single operating division to four operating divisions that serve a large addressable market and represent more than 18 respected consumer brands,” company president and CEO James Debney said in a statement.

“We believe the name American Outdoor Brands Corporation will better reflect our family of brands, our broad range of product offerings, and our plan to continue building upon our portfolio of strong American brands. Looking forward, we intend to aggressively grow organically and through strategic acquisitions, focusing on brands and products that best meet the needs and lifestyle of our target consumers.”

The Smith & Wesson name will continue as the company’s firearms brand.

The move echoes Philip Morris Co.’s decision in 2003 to change its parent company to Altria. That change, company officials said at the time, was to reflect the company’s broader portfolio of products (which at the time also included a stake in Kraft, which has since been spun off), but it was also seen as a way to distance the company from its controversial tobacco and smoking roots.

While it’s possible the name change could be a way to attract investors who might be wary of owning stock in a hand-gun company, it’s more likely the move is for consumers who might be shocked to find a piece of innocuous camping equipment is associated with a well-known gun brand, says Matt Gordon, executive director of naming and verbal identity at Landor.

“From an investor point-of-view, there could be an advantage to distancing from a controversial topic,” Gordon tells Marketing Daily. “I’m guessing they also see some consumers who might also be [open] to it.”

Changing a well-known brand’s name can be tricky, Gordon says. (While Landor worked on Philip Morris’ brand identity — though Gordon did not work on that project — it had no role in the Smith & Wesson change.) Adopting a company name with a number of words runs the risk of being reduced to an acronym at some point. (“American Outdoor Brands Corp.” becomes “AOB,” for instance.)

“There’s a strong inherent tendency in language to shorten,” he says. But it’s likely over time that people will forget that one company makes both camping equipment and handguns. “There are cases where you could run across the name of the company as a consumer and may not know it’s Smith & Wesson.”