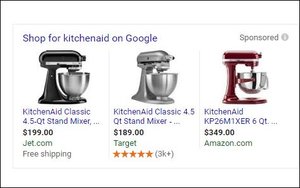 If Amazon reversed its policy and put resources behind product listing ads (PLAs), the move would significantly reshape the search marketplace for U.S. retailers. It would make the marketplace the dominant player in the PLA space -- taking significant consumer impressions and traffic from every other retailer using Google Shopping campaigns, according to analysis released Friday.

In fact, Amazon has the potential to become more successful in PLAs than text ads, considering that Google allows one advertiser to have multiple products show up in PLA results, but permits only one ad per advertiser in its text ad results, Jim Leichenko, director of marketing at AdGooroo, told Search Marketing Daily.

During the last week in December 2016, Amazon initiated a limited test of PLAs in the U.S. running across google.com. Recently, the marketplace has been seen testing a few more on google.com, mainly in the home product category. KitchenAid is one example.

Amazon dominates Google text ads in the U.S. retail category. "As an example, from January through November 2016, Amazon had a 35% share of voice on the top 50,000 retail keywords," Leichenko said. "Their closest competitor was Target with a 10% share of voice."

Amazon, the largest paid-search advertiser worldwide based solely on the amount spend for traditional text ads, has avoided sponsoring product listing ads in the United States. The marketplace ranks in the top 25 PLA advertisers for the 2,500 top retail product keywords, according to AdGooroo, data.

AdGooroo also analyze a separate keyword group with 400 top home-goods keywords from December 25, 2016 through January 3., 2016, in which Amazon ranked No. 8 in spend and No. 9 in clicks on the Home Goods keyword group, surpassed only by Walmart, Bed, Bath & Beyond, Houzz.com, Overstock.com, Target, Sears and Wayfair out of 846 advertisers who sponsored the 400 keywords during the 10-day period.