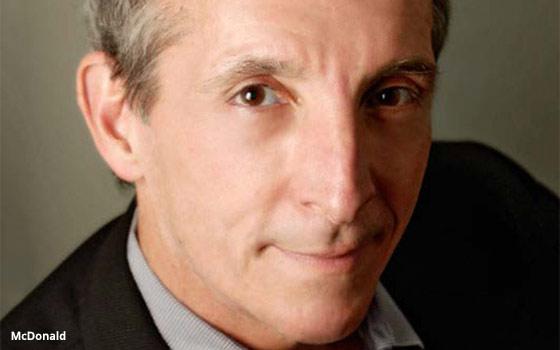 On the eve of the Advertising Research Foundation’s annual Audience Measurement Conference (June 11-13 at the Hyatt Regency Jersey City), new ARF CEO and President Scott McDonald gave Media Daily News a sneak preview of what’s hot, including some fever points around TV vs. digital, ad fraud and the role of blockchain technology, as well as a potential backlash to the commoditization of programmatic media-buying.

Media Daily News: You’re teasing next week’s event as “it’s not going to be a safe conference.” Can you elaborate on that?

Scott McDonald: Well, we have probably more contentiousness around what to measure, how to count things, what is most fair to the various media platforms involved than is usually the case. It’s partly because it keeps opening up. What used to be a pretty straightforward process -- where a company like Nielsen or comScore set up a panel and measured individual players using the same set of tools -- because of all the new distribution methods and complexity of all the new players, it is evolving into the direction of what I call a “cooperative model” where the measured have to agree to be measured. They have to insert elements and beacons and video streams on Web pages, and there are so many other variables that can sneak in and make things not comparable in such an arrangement. Plus you can have walled gardens or companies like Netflix refusing to cooperate under the terms that are set. So it becomes a much more complex picture.

What we’ve tried to queue up with the conference isn’t that it’s not safe -- we want it to be high-minded and polite -- but confronting and helping the audience understand what’s at stake. It’s not just about the mechanics, but also the definitions. There is one camp that wants everything to flow from [the current Nielsen national TV audience standard of] C3 or C7 and build out to accommodate the kind of gross impressions estimates to become the coin of the realm in digital. And then there’s another group that wants to go in just the opposite direction and start with digital gross impressions and add a time dimension to it. And those two approaches don’t exactly get to the same place.

I view that part of the conference as building incrementally on the debates that were engaged at the most recent CIMM [Coalition for Innovative Media Measurement) conference, at least in regard to television audience measurement and digital. That’s the opening contention on the first day.

For me, one of the most interesting points of contention will be at the end of the first day when we talk about the problems of fraud and “digital supply chain corruption.” We tried to build it around the question -- which I don’t think has been explored in this kind of setting before -- about whether blockchain technology, which has become important in the financial sector and very disruptive in fintech, is starting to see that being applied to and cleaning up the problem of fraud by using a variation of a public ledger using a blockchain structure. That’s kind of a new approach. It’s a new way of thinking about managing fraud. It is potentially quite scalable compared to something we might typically do, like commission an MRC audit. Audits are expensive and they take time, and there’s always the question of what compliance looks like until the audit is finished.

There’s a certain amount of debate built into that, because we also have the [Interactive Advertising Bureau] proposing the ads.txt based solution, another cooperative solution in which the measured have to agree to insert these elements in their own stream.

And of course, there are other proposals out there. White Ops has proposed a sort of whitelisting system, which is relatively low-tech, but also requires a lot of updating and upgrading.

And around all of this you have some marketers saying they should cut back from the long-tail -- cut back to 400 websites from 5,000 Web sites as a means to manage quality.

There are a lot of approaches companies are trying right now. This is an effort to shine a spotlight on something that hasn’t really hit most people yet. I would expect we will be talking more about blockchain, a year from now, so this is probably the first forum for our constituency to scrutinize it in the context of what I hope will be a lively debate.

MDN: It’s interesting that you’ve programmed so much about fraud and process in what is normally a conference about audience measurement.

McDonald: I don’t know that we can talk about audience anymore and just wink at the existing and well-documented problems of fraud. If fraud is getting in the way of delivering the audience, then it becomes relevant to audience measurement.

MDN: Why is that any different than in the analogue world? We always had fraud and it was the role of advertisers, agencies and the media to suss it out?

McDonald: What’s different now is that can have spotless behavior by both the buyers and the sellers and still fraud can happen in the supply chain, because it’s so complex.

MDN: What else are you looking forward to?

McDonald: I think the sessions on Tuesday that have to do with blending data science and traditional research to manage your audience data will be quite interesting. I’m also very interested in the next installation of our “How Advertising Works” study. In this case, it’s focusing a lot on the value of context over and above what targeting provides. The tendency in programmatic buying, in particular, has been to seek your audience targets at the lowest possible cost. And in grinding down the cost, the focus tends to be very much on the caliber of the targeting and tends to set the value of the context in which the ad is served closer to zero. In traditional media placement, you paid a premium for that position in prime-time or in a magazine adjacency. So we’re going back to that economic question of what is the value of context relative to targeting.