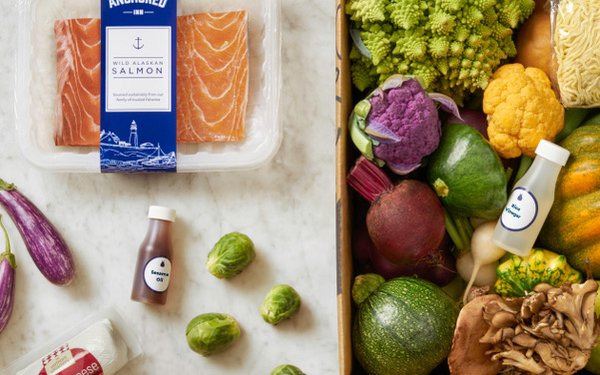 While the news that Amazon has filed a trademark for meal kits is an (obvious) punch in the gut for Blue Apron, experts say it’s likely to wound traditional grocers as well.

While Amazon has dabbled in the tiny meal-kit category before, the news—first reported in the Times, which reports that Amazon has registered “We do the prep. You be the chef” as a new trademark—further marks the online giant’s intentions to shake up the way Americans buy groceries.

“It’s not a huge surprise,” says Cooper Smith, director of Amazon research at L2, the New York-based digital think tank. “But it’s clear that Amazon has decided 2017 is the year it is fully committing to trying to disrupt the grocery market, which is the biggest market by far. And just as this is bad news for legacy meal kit companies like Blue Apron and HelloFresh, it’s also bad news for legacy supermarkets.”

Americans spend about $780 billion on groceries each year, with most families making at least two trips to the store per week, he says. And while the meal kit category is fraught with problems—including reports of high churn rates as consumers wrestle with food quality, high prices and the reality that even a meal kit requires some preparation—Amazon’s announcement is an indication that it could grow beyond its tiny niche among Millennials. The NPD Group says just 5% of households are currently using the products, but estimates that the number is likely to increase as the kits become more affordable.

Smith calls it a “perfect” category for Amazon, especially among its core Prime membership, and Amazon already sells meal kits, partnering with brands like Tyson Foods and Martha Stewart. “Amazon is so good at predictive analytics, and Prime members are already more open to online grocery shopping,” he says, with services like AmazonFresh and Prime Pantry Box, which allows customers to group orders that would be too expensive to ship individually. And its recent acquisition of Whole Foods Market, which also offers some meal kits, adds to the logic. “I remember a few year backs reading an interview with one of the executives from Plated, another meal-kit company,” Smith tells Marketing Daily. “And he described its ideal customers as a Whole Foods shopper.”

Shares of Blue Apron, already limping after a disappointing public offering just as Amazon acquired Whole Foods, got clobbered on the news. But for Amazon, with so many other food delivery initiatives in the works, “this is definitely an experiment, and no one expects it to be the next big thing,” Smith says. “This is simply another effort from Amazon to better serve its Prime members, and with its data and efficiencies, it’s in a better position than most.”

NPD says that with about 31 million households with Prime membership or access to one, “it makes sense that 52%of online grocery shoppers are Amazon Prime members.”

Online grocery shopping still accounts for just about 7% of all grocery orders, although observers expect adoption in the U.S. to increase dramatically: Nielsen expects that share to rise to 20% by 2025. And it’s not just Millennials. Men, who now do 40% of all primary food shopping, prioritize efficiency and speed, NPD says.