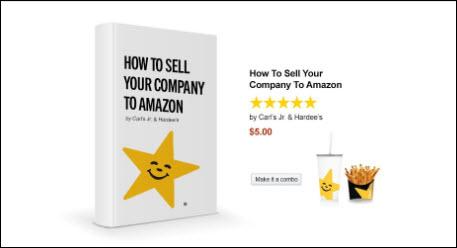 Its latest ploy: Announcing that, starting as of 3 am ET on Oct. 9, it would tweet out a different “big idea” every hour for 24 hours on its Twitter channel — all aimed at striking up a relationship with Amazon.

“This is about generating a conversation around a partnership,” Jeff Jenkins, chief marketing officer for Carl’s Jr. and Hardee’s, told USA Today. “The tweets are obviously a start to try and see where the dialogue goes…have a lot of fund with it, and see if they find the spirit of it as fun as we do.”

The tweets are all hashtagged #AmazonBuyUs. And one of them (shown) has an image of a made-up book, titled “How to Sell Your Company to Amazon,” that is “by Carl’s Jr. & Hardee’s.” The big idea? “’Make it a combo’ ordering a book (like this classic by us & @Hardees)? Add fries & a drink to make it a combo!”

Other ideas posted include an exclusive drive-through lane for Amazon Prime members at Carl’s Jr. locations; a cloud-based restaurant; and having Amazon market and home-deliver the boxed, $5 “All Star Value Meals” from Carol’s and Hardee’s.

The fast food brand will continue to aim ideas at Amazon for the rest of the week, it also told USA Today.

Is the restaurant company really trying to be acquired by Amazon? Will Amazon take any of the floated big ideas seriously?

Consider it a sort of social marketing cliffhanger… .