This Is Us: 'AFV' Is TV's Best Take On American Life 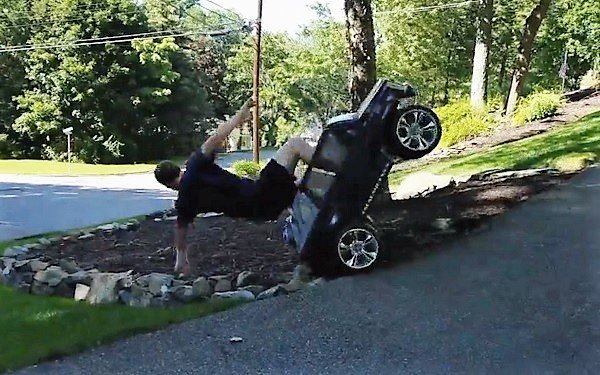 Of all of the hundreds of shows now available on networks and streaming services, which one represents TV’s best take on contemporary America?

“America’s Funniest Videos,” of course. One of the most striking things about this long-running show -- an ABC staple since 1989 -- is the use of the word “Funniest” in its title.

The show was once known as “America’s Funniest Home Videos,” but dropped the word “home” at some point -- probably some time after the tipping point when mobile phones with video capabilities replaced home-video cameras in the typical family’s arsenal of consumer technology.

Certainly, the consideration of something as “funny” or “funniest” is a subjective notion. By using the word “funniest” in its title, however, this show posits that every video clip it shows is “funny” -- no matter how hard the people in the clips clunk their heads on half-open garage doors or fall on their faces off of swing sets and riding mowers.

American “low” culture has long gravitated toward this kind of comedy. Slapstick punches, eye pokes and assaults with pies and two-by-fours -- basically, the “hilarity” of assaulting other people (but in a comic way) -- has long been a staple of comedy.

And observers have often remarked on -- and questioned -- most people’s doubled-over reaction to seeing someone else suddenly slip and fall on a sheet of ice. The person might be hurt, but for some reason, people laugh anyway.

As for slipping on the proverbial banana peel, that doesn’t count because, really, has anyone actually ever seen anyone slip on a banana peel in the real world?

“America’s Funniest Videos” satisfies our hunger for everyday banana-peel and ice-slipping comedy (without, to my knowledge, ever showing the former). In the process, this show holds a mirror up to our contemporary American life like no other TV show.

The vast majority of clips on “AFV” show America at leisure -- specifically, the many ways in which we fill our down time with behavior in which mindfulness of the risks and pitfalls is almost never practiced.

Take the guy in the photo above. It's a screen grab from this past Sunday’s episode of “AFV” (which incidentally drew a total audience of 5.3 million, according to the overnights).

In this particular segment, a series of clips were shown -- contributed by viewers -- in which various accidents and mishaps took place in the operation of miniature, motor-powered vehicles.

The guy in the screen grab lost control of his mini-car while attempting to drive it down a steep driveway and he wound up backwards and off the asphalt, whereupon the car tipped over and he was thrown off it.

His head narrowly missed a collision with the rocks lining that flowerbed, but the car ended up at least partially on top of him. Ouch -- that must have hurt. But whether or not this man was injured was not mentioned. The “AFV” studio audience was too busy laughing.

Not that I blame them. It's the seeming stupidity and carelessness of this accident with a toy car that was the funny part -- not necessarily this man's awkward spill and possible injury.

He was trying to engage in a simple pleasure (his young daughter was also trying to navigate the same driveway in her own toy car), but his mishap became a guilty pleasure for millions of others (but it was only a “guilty” pleasure if one felt guilty about laughing at it).

In the main, “AFV” shows a country with time and resources to spare. Whether we come out of them injured or unscathed, we Americans pursue our leisure activities with enthusiasm and laughter -- even when the rickety roller coaster we nailed together in the backyard collapses from under us (another clip seen on “AFV” on Sunday).

And we do not seem to mind letting millions of others in on it. It should be acknowledged here (or in any TV blog about “America's Funniest Videos”) that the clips on this show are provided voluntarily by the very people who are in them.

The clips reveal that we Americans are a resilient people. And even when our toy cars veer off the pavement into a flowerbed lined with rocks, we are inured to embarrassment.

tv
1 comment about "This Is Us: 'AFV' Is TV's Best Take On American Life".
Check to receive email when comments are posted.
Next story loading