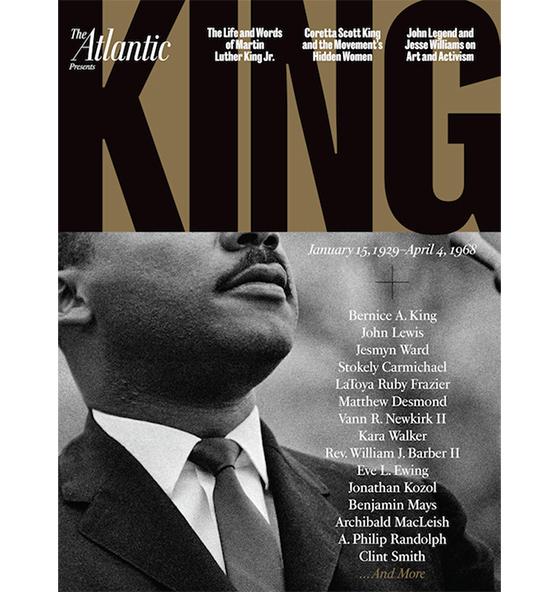 In 1963, The Atlantic published an excerpt of Martin Luther King, Jr.’s “Letter From a Birmingham Jail” under the title “The Negro is Your Brother” — his response to criticism from eight white Southern religious leaders. The piece is a classic document from the civil rights era, and the magazine, which had already established itself as a forum to challenge racial injustice, immortalized King’s words in print.

Five years later, King would be assassinated. This year marks the 50th anniversary of his murder.

To commemorate the half century since King’s death, The Atlantic has published a special issue called KING, filled with original and archived material that speaks to his legacy today.

Editor-in-chief Jeffrey Goldberg recounts being approached by staff writer Vann R. Newkirk and managing editor Adrienne Green about publishing a special issue leading up to that historic date. Goldberg was interested, but writes in his editor’s note, entitled “The Chasm Between Racial Optimism and Reality,” he was “also concerned that such an issue be an exploration of our fraught moment, and not merely a devotional artifact.”

Goldberg adds: “The hope of well-meaning people is that the color line will not be the chief problem of the 21st century. But the analysis of realists, particularly in the wake of the 2016 presidential contest, indicates that matters of inequality and racism may be with us for decades to come.”

The staff chose a route that would provide a wide-ranging look at King’s legacy through the lenses of what he called the “three major evils": racism, poverty and militarism. The issue is as much a history of the civil right’s movement and how the world stands now, as it is a commemoration.

The issue is available on newsstands now, and stories will be shared on The Atlantic’s website leading up to April 4, the date of King’s assassination.

Throughout its 161-year existence, The Atlantic has given voice to social and political inequalities, underscoring the importance of a free press that advocates for the public good.