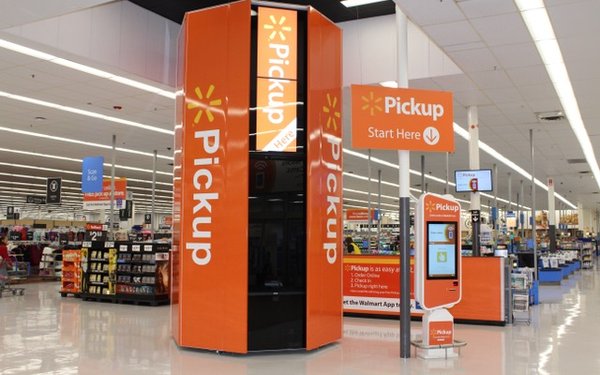 As Walmart continues to intensify its efforts to integrate technology throughout the shopping process, it says it is stepping up the rollout of massive pickup towers for online orders.

The machines were installed in some 200 stores last year, and the Bentonville, Ark.-based retailer says it is adding 500 additional towers. Doing so, it says, will make the alternative delivery method available to nearly 40% of the U.S. population.

Customers use their mobile device on the towers, and in a presentation to investors last month, Gregory S. Foran, president of Walmart U.S., told a group of investors the towers retrieve parcels in 15 seconds.

The company says it is installing the new towers with pickup lockers so that customers can retrieve larger packages in the same way.

Foran says that it’s all part of the significant opportunities the chain sees in omnichannel. “Our view here is that customers should be able to shop when they want, where they want and how they want,” he says, adding that the company is “completely ambivalent” about whether people make their purchases online, in stores or in some combination.

He says grocery pickup is now available in 1,100 locations, and that it will likely add another 1,000 this year. “We're doing it right. The customers like it. Our NPS scores for what we're doing with Online Grocery is incredibly high,” he says.

Meanwhile, in more evidence that the company aims to out-Amazon Amazon, Reuters reports that Walmart has completed the due diligence process to acquire 51% of Flipkart, the Indian e-commerce company started by former Amazon employees. (Earlier reports have speculated it would seek a smaller stake.)

Reuters, which reports that Amazon is mulling a rival offer, says Walmart could spend between $10 and $12 billion in the deal. It says the Indian e-commerce market is expected to reach $200 billion in the next decade.