Nielsen Patents Method For Compressing TV Ads, Finds They Can Work Better Than Longer Ones 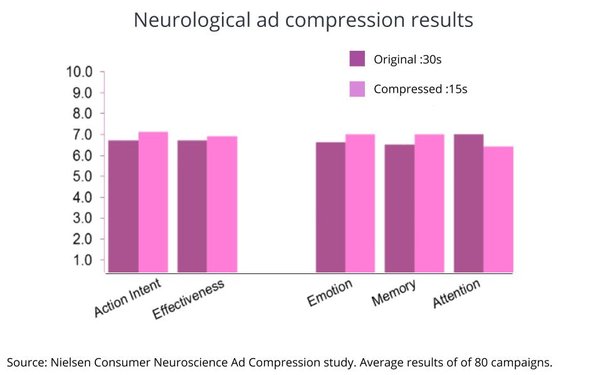 Nielsen has quietly begun rolling out a new offering that enables advertisers to compress the length of TV commercials -- and potentially other video ads -- in a way that makes them as or more effective than their original length, and far cheaper to buy.

The new method, which is being bundled into Nielsen’s existing consumer neuroscience practice, is effectively being offered as added value to brands and agencies that use the service to test the effectiveness of their campaigns.

Nielsen has not disclosed which brands are using the service, but an internal validation study tested 80 separate campaigns and found that when 30-second spots were compressed into 15-second versions using the method, they performed as well or better across all the brand metrics the service tests for, including: action intent, effectiveness, emotion, memory and attention.

The findings represent a potential breakthrough for optimizing both the length of TV and video ads, as well as their media budgets, at a time when both buyers and sellers are rethinking consumer attention, as well as advertising clutter.

The research, which was overseen by Nielsen’s Chief Neuroscientist, Dr. Carl Marci, who briefed MediaPost on it in advance of this week’s Advertising Research Foundation conference in Jersey City, New Jersey, where he will be unveiling other new neuromarketing research findings.

He said Nielsen did not have enough examples of even shorter-form commercials -- six-second units being tested by Fox, for example -- to see whether the compression methods hold up for those duration, but he said it is something Nielsen plans to test in the near future.

The findings, meanwhile, seem to answer an age-old question for Madison Avenue: what is the communication value of shorter-length commercials? It’s a question that was asked repeatedly when advertisers began converting from :60s to :30s, and asked once again when they began adopting :15s, and now :06s.

Asked recently what the most requested research topic is from the ARF’s knowledge center, ARF President-CEO Scott McDonald said it was research about the effectiveness and value of shorter-length TV commercials.

Dr. Marci said Nielsen currently is not charging for the TV and video ad compressions, and offers them as part of its standard effectiveness testing. Typically, he said it costs about $15,000 to $20,000 per TV ad campaign test.

The testing first measures consumers’ neurological response to TV ads they are exposed to using Nielsen’s proprietary methods, and then it uses algorithms to automatically select the portions of the ads that engage consumers the best.

Dr. Marci said all of the campaigns compressed in the test utilized simple automation, but he said that having agency creatives and producers involved in post-editing the compressed ads to finesse the quality of them, would likely improve their effectiveness even more.

“I would like to think you would see another 10% to 20% improvement,” Dr. Marci said of neuro-compressed ads that were post-edited by ad pros.

One reason Nielsen is releasing the results now, is that it was just granted a patent on its neuro-compression method from the U.S. Patent and Trademark Office.

Dr. Marci said he could not predict how even shorter-form units would perform in the long run, but he has also been conducting ongoing research suggesting that average consumer attention spans for media consumption are going down, particularly among Millennials.

“Right now, the 15-second ad starts to look pretty good as the new seet spot for television advertising,” he said, adding that Nielsen’s neuro compression method shows “there doesn’t have to be a loss and there might even be an upside” when ads are cutdown to shorter-length versions. 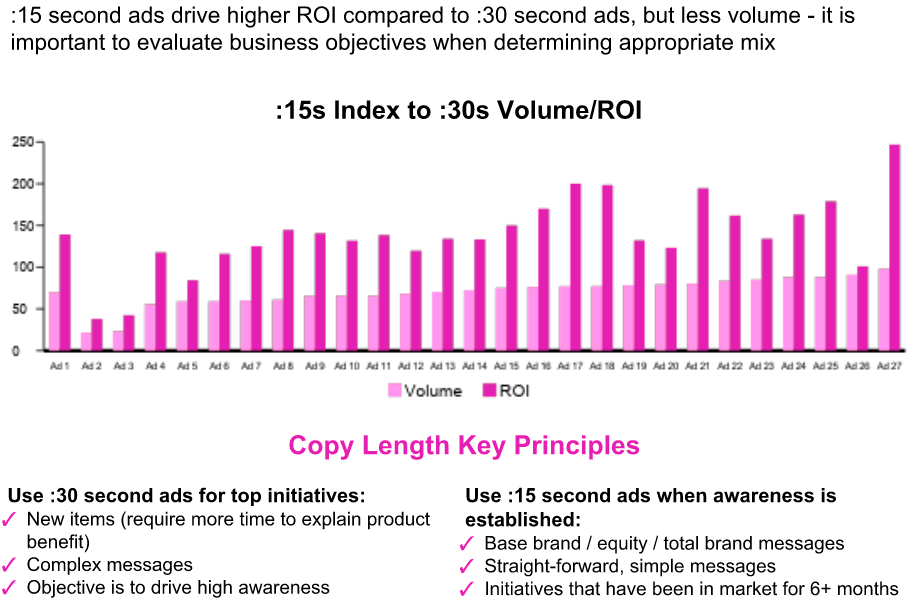