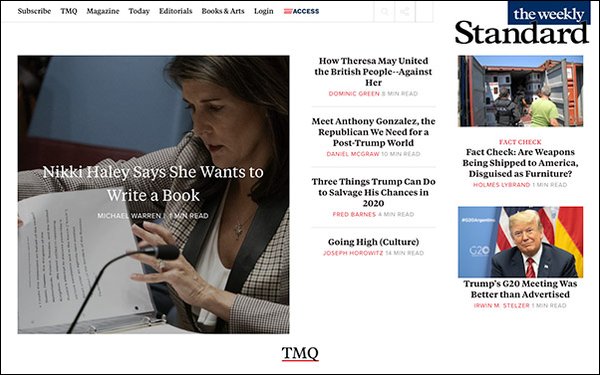 The Weekly Standard is facing an uncertain future, according to multiple news outlets, even though the site has seen significant traffic year-over-year.

The Weekly Standard’s total unique visitors grew 80% in October 2018, compared to the same month a year prior. That’s according to the latest analysis of Comscore data by TheRighting, a media company that aggregates articles from right-wing media outlets.

The Weekly Standard had over 2.5 million uniques that month — more than RushLimbaugh.com, Infowars and Hannity.

However, the conservative magazine’s print circulation has steeply declined. Five years ago, The Weekly Standard had a print circulation of about 100,000, according to Politico. Last year, that number had fallen to 72,000.

Media critics believe this may have something to do with The Weekly Standard’s critical position against President Donald Trump.

Between 2016 and 2017, paid circulation for the magazine dropped by about 7,000, according Politico, citing information from auditing group BPA Worldwide.

Parent company Clarity Media Group Inc. and subsidiary MediaDC are focusing their efforts on sister publication Washington Examiner, at the expensive of The Weekly Standard.

The publisher announced this week it is relaunching Washington Examiner’s weekly magazine for a national distribution starting next year, with a new look and more life and culture coverage.

Clarity added it had no news to share about its evaluation process.