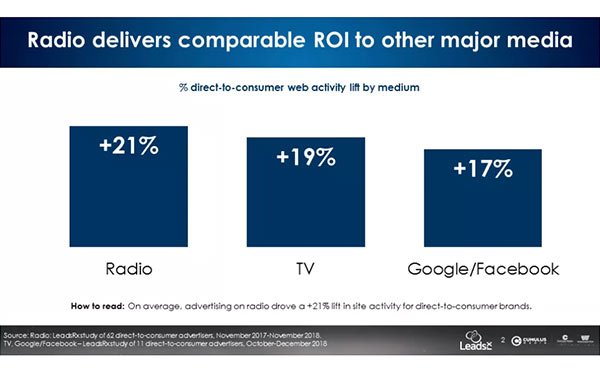 Google search and display ads -- and Facebook ads -- may not be the best type of media to begin with to drive website traffic for direct-to-consumer retail brands, according to a report released Friday. The findings suggest that brands may want to begin with TV and radio -- including podcasts -- and then add search, display and video.

The data suggests that combining radio and television advertisements delivers twice the site traffic compared with running Google and Facebook ads. The findings come from the audio network Westwood One, and the multi-touch attribution firm LeadsRx.

The two companies analyzed the direct-to-consumer retail category using data commissioned from MARU/Matchbox. The findings reveal insights on the marketing effectiveness of DTC advertising campaigns, analyzing the type of media with the greatest impact, among other findings.

The study reveals that a combination of AM and FM radio ads with television ads generates twice the website traffic lift of Google ads and Facebook ads.

LeadsRx found that combining TV and radio drove a combined 40% site traffic lift, compared with 17% for Google and Facebook. For audio, podcasts and radio delivered the return on investment, according to the data.

Ironically, DTC brands often initially launch search campaigns or other types of media on digital platforms using their own first-party data to drive performance, but the findings say they should do otherwise. The amount spent in TV and radio seems to generate a major impact when starting with audio and television.

John Leeman, president and CMO of Brand Value Growth, believes many DTC brands think too highly of bottom-funnel tactics like social media and display advertising or remarketing and search engine marketing and advertising,

The awareness of DTC brands is highest among consumers between the ages of 18 and 34, and drops sharply in older demographics. Male awareness is higher than female awareness.

Apparel and home products represent the most shopped DTC categories.