At Nearly 100, 'Architectural Digest' Thrives in the Digital Age 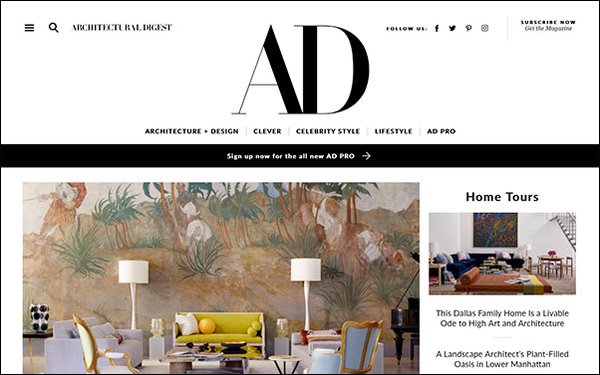 Since EIC Amy Astley took the helm of Architectural Digest and brought on executive digital director Keith Pollock nearly three years ago, the venerable title has found a new voice and ever-growing audience across its digital platforms.

“From the beginning, Amy [Astley] understood we needed to create different verticals for AD’s digital allowing us to push in directions that let us go narrow and deep,” Pollock told Publishers Daily.

Since his arrival at Architectural Digest, Pollock said the biggest charge was “to raise the quality of what we were doing digitally and socially, trying to match what we were doing in print. It was about creating an environment where designers felt proud to have their work showcased.”

Pollock and the digital team worked to elevate the quality of the content, be it featured home tours, writing or photography and have been “successful in creating this premium digital expression of the brand.”

Clever showed a 103% increase in traffic and 119% increase in time spent on the site by millennials in 2018 versus 2017. AD Pro has shown a 65% increase in visitors since August 2018. (Clever exists separate from Architectural Digest, with no overlap of design aesthetic or voice; it's about creating a new millennial design resource.)

To enrich content, Pollock asks the digital team to consider:“Is it relationship building? Is it good for traffic? Does it speak to the core of our brand values? Is it good for social? Would this piece make a wonderful video?”

Clever, AD Pro and Architectural Digest each attract different but dedicated advertisers and sponsors within their brands. For the launch of Clever, the outlet partnered with the Home Depot Décor collection to create custom “how to” videos and articles for Clever and Home Depot sites. The alliance also included a licensing agreement.

Architectural Digest has long counted Sothebys as an important advertiser; they work closely on real-estate listings. The launch of AD Pro’s subscription platform was done in exclusive partnership with Dacor and involves a slew of custom content and a new set of events called AD ProWorkshops.

The Instagram strategy has paid off in traffic growth, which increased by 930% in December of 2018 compared to 2016.

“I’ve worked in digital media for over 15 years, and I’ve seen trends come and go. The product has to be strong and trustworthy. It needs to be necessary,” Pollock said.