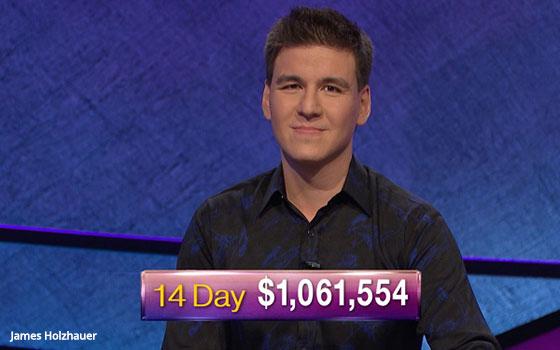 So-called disruptors are turning up in all facets of our fast-changing society these days, upending traditional businesses, households and lifestyles.

And now, a disruptor has turned up on “Jeopardy!,” the long-running and very successful quiz show that is emblematic of the best of what has come to be known as “legacy” television. “Jeopardy!” is a show that still has legs doing it the old-fashioned way, with a format that has not changed significantly in 35 seasons.

The disruptor is named James Holzhauer, a 34 year-old resident of Las Vegas who lists his occupation as “professional sports gambler.”

In a series of “Jeopardy!” shows that were taped some months ago, Holzhauer is putting on a performance that is stunning host Alex Trebek, viewers at home, and a parade of losing contestants.

His hapless competitors -- 34 as of last Friday -- look like they do not know whether to laugh or cry as Holzhauer jumps way of ahead of them early in every game and then proceeds to extend his lead to preposterous lengths right through to the end.

In all the games he has won -- 17 straight as of last Friday -- he has been unreachable in “Final Jeopardy,” which means we viewers already knew he would win each game going into this closing segment.

Sometimes, other contestants are far enough ahead by the show's final and deciding frame to claim an easy, risk-free victory, but not usually. In Holzhauer's streak, his long, insurmountable leads have had the effect of removing the suspense that close games frequently provide in “Final Jeopardy.”

Now, the only suspense that the show’s final segment provides is finding out how much he wagered and how much he then won. Night after night, the amounts have surpassed any of the winning tallies that long-time viewers have ever seen on so many consecutive games.

While that is certainly interesting, particularly at the outset of his streak, it has also become monotonous as it robs the show of the old feeling of excitement that closer games produce.

Watching Holzhauer run away with the game day after day makes it reasonable to wonder if (or how) anyone will ever topple him. For the record, Holzhauer has piled up cash winnings of $1,275,587 in 17 games going into Monday's game.

It is not yet a total-winnings record, but his pace and his astonishing mastery of just about every category he has faced on the show indicates he stands a strong chance of surpassing the two previous contestants who hold the one and two positions in the list of most money won on “Jeopardy!”

In first place is another “Jeopardy!” champion, Brad Rutter, whose total winnings since his first appearance on the show in 2000 are estimated at $4.3 million -- most of it stemming from various “Tournament of Champions” competitions held in the years since he first competed.

When Rutter first became a champion, the show's rules prohibited any multiple winner from continuing after winning just five consecutive days. The rule was dropped in 2003, but only Jennings and now Holzhauer have dominated the game so completely that some long-time fans of the show are scratching their heads in consternation.

Let it be stated clearly that the fault, if there is one, is certainly not Holzhauer's. He is a very attractive contestant -- smart, shrewd, confident and low-key. The man is not a showboater, which is one of his strengths.

Certainly, the law of averages would seem to dictate that someone sometime will come along to defeat him. But who knows when? And can “Jeopardy!” survive the monotony of this man’s total domination?