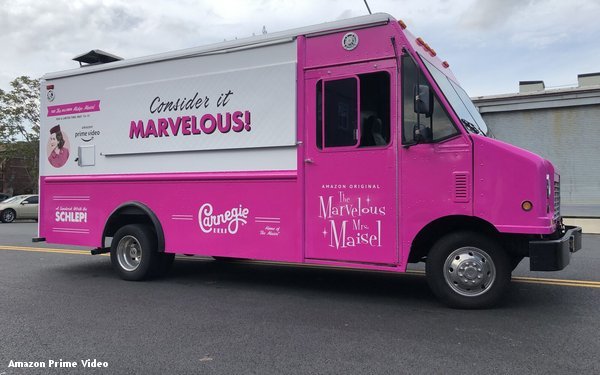 TV’s upfront week is usually all about the big networks: CBS, ABC, NBC, Fox, the WarnerMedia channels. This year, however, attendees of the upfronts got a taste of big tech, quite literally.

Amazon Prime Video decided to use the upfront week to launch an activation tied to its show “The Marvelous Mrs. Maisel.” Outside the upfront locations across the city, a Carnegie Deli-themed food truck — emblazoned with imagery from the show — handed out complimentary pastrami sandwiches and black-and-white cookies.

Carnegie Deli “employees” greeted those walking into the upfronts with cookie-filled bags. “Have a cookie courtesy of Mrs. Maisel!” An enthusiastic staffer told attendees in a 1950’s-style affectation.

“It really has to do with the fact that there is so much press and activity around television, and there is a lot of people reading and talking about what TV shows are coming and going. We have a great TV show coming back, and we wanted to celebrate that,” Mike Benson, head of marketing for Amazon Studios, told Digital News Daily, standing by the food truck, which was parked a few blocks from Lincoln Center ahead of Disney’s upfront.

"It is really hard to get noticed in a sea of 500-plus TV shows out there,” Benson added. “This is about customer engagement, and showing that there is a lot of value in what we have got, beside shipping.”

The food truck activation was the second time Amazon resurrected the Carnegie Deli to promote “Maisel,” once again working with its production partner Tool of North America. While the iconic midtown delicatessen closed its doors in 2016, Amazon brought it back late last year to promote the new season of the show. A recreation of the deli opened in lower Manhattan, with 1958 prices, and sandwiches named after characters from the show.

“When the Carnegie Deli was open, you made it when a sandwich was named after you,” Benson said. “So it is fun to take The Midge, and The Susie, and turn them into sandwiches.”

Benson says that the company is planning to run year-round activations to promote the show and drive awareness, and is expanding its experiential marketing efforts across its programming.

“We have started to do a lot more experiential. We had a big activation at San Diego Comic-Con last year around ‘Jack Ryan,’ we had a big activation at SXSW for ‘Good Omens,’” Benson says. “We like experiential, we think it is really interesting for the fans to go a little deeper and experience a show in a way they couldn’t watch it on the screen. We also think it is great for non-fans, it allows them to experience it outside of a traditional media channel, and it becomes an interesting part of an overall marketing strategy for us.”

Of course, in order for the campaigns to work, it needs to feel fresh and appropriate.

“Not every show can go off and do a pop-up Carnegie Deli. If you are going to do them, they need to feel organic to what the television show is,” Benson says.

In this case, the availability of the Carnegie Deli brand name, and upfront week, made for a singular opportunity.

“It is a piece of nostalgia that is relevant today, and there is something about the show that is the same way,” Benson says.