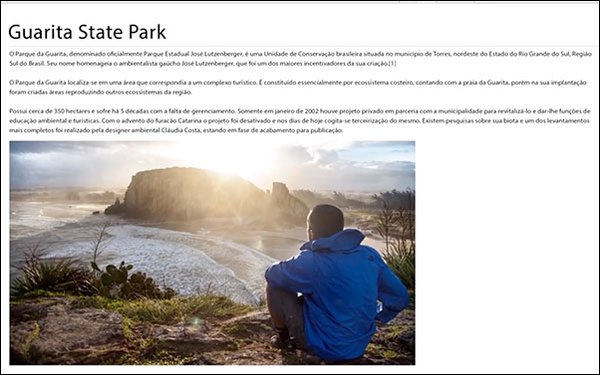 The North Face stepped up Thursday to apologize for its marketing campaign blunder that involved using Wikipedia to drive awareness of the brand in Google Image search results.

The campaign involved switching travel destination photos with product-placement shots in Wikipedia, so each time someone searched for a location in Brazil they would see an image of the destination site with a model wearing a piece of clothing from the brand. The campaign originated in Brazil, with Leo Burnett Tailor Made spearheading the project.

“We believe deeply in Wikipedia’s mission and integrity -- and apologize for engaging in activity inconsistent with those principles,” wrote a spokesperson for the North Face in an email to Search Marketing Daily. “Effective immediately, we have ended the campaign and moving forward we’ll strive to do better and commit to ensuring that our teams and vendors are better trained on Wikipedia’s site policies.”

The spokesperson also explained how The North Face is in the process of reaching out directly to Wikipedia to determine the best way to make it right.

A spokesperson for Leo Burnett Tailor Made said the agency always looks for creative ways to meet consumers where ever they go, but since running this campaign the team learned the effort worked counter to Wikipedia’s community guidelines. Understanding the issue, they ended the campaign.

"Our team has further accepted an invitation by Wikipedia to learn more about the platform and their work to share unbiased, fact-based knowledge," a spokesperson for the agency wrote in an email. "We look forward to working with Wikipedia to engage with them, and with respect to their network of volunteer editors, better in the future."

The video posted to YouTube explaining the campaign begins by acknowledging that most trips start with a search on Google, and states that the first image typically is from a Wikipedia article about the destination. Swapping an image with someone wearing a jacket from The North Face for one that just showed the travel destination would ensure the brand stayed top of mind for those specific searches.

Among them, Henner tweeted a suggestion to be respectful, make a donation, enter the @WikiLovesEarth annual photo contest, work with the editors to contribute content to some of the articles across Wikipedia, and release some of the images from the past 51 years under a free license in Creative Commons.