Another Day, Another TV Show About Grim, Gritty Boston 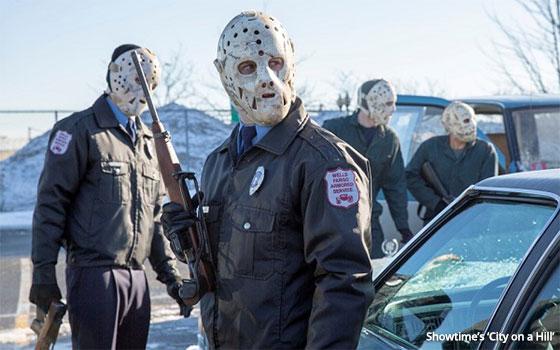 The great city of Boston takes it on the chin once again in yet another exploration of the mysteries and myths of mobsters and corrupt cops in the Massachusetts capitol that seem to fascinate so many filmmakers who hail from the Bay State, and even some who do not.

As for the rest of us, far be it from me -- your faithful TV Blog scribe born and raised in Philadelphia -- to speak for the millions of other non-Bostonians out there, but it is reasonable to ask: Must we examine this Boston underworld again? Or a corollary question: Isn't there some other portion of life and culture in Boston and its environs that we might explore instead?

Ben Affleck doesn't seem to think so. The Boston-area native is an executive producer -- along with Tom Fontana and Barry Levinson -- of “City On a Hill,” a new drama series covering the subject matter described above that premieres Sunday night on Showtime.

From this show and various movies and TV shows like it, one forms the impression that Boston is a grim, horrible place populated solely by an endless array of hard-drinking, chain-smoking white tough guys in slouch caps. They deal drugs, plan elaborate heists and murder people.

And this being a pay-cable channel in the year 2019, the cops and hoods in “City On a Hill” (groups largely indistinguishable from each other) speak in a dialect of English in which the f-word and its many variations are featured frequently -- oh, about every third or fourth word or so.

This is supposed to demonstrate to the rest of us that these are truly tough knockaround guys who are not to be f----- with. It does not seem to have occurred to anyone involved in the creation and production of this show that these characters and their four-letter language are stale, one-dimensional clichés.

“City On a Hill” and the other movies and TV shows depict a Boston that makes Detroit seem like ancient Athens in comparison. But wait a minute -- isn't Boston the city of Harvard, MIT and probably another dozen top universities?

Boston does happen to be a city of learning, art and culture, although the TV Blog is well aware that these positive attributes are not attractive TV fodder -- at least not as attractive as mobsters and murderers.

And so, before you can say “The Departed,” we are introduced to a booze-guzzling, chain-smoking jerk who happens to be an FBI agent. He is what passes for a main character in this show. He is played by Kevin Bacon in a way that indicates his “research” into the playing of this role consisted of watching about a dozen other Boston gangster movies and TV shows.

In a TV show full of stereotypes we have all seen before, Bacon's character is the king of the clichés. He swaggers down hallways, through courtrooms, and into police and FBI offices like he owns them all.

He gets drunk and engages in sex romps, then goes home and lies to his wife about where he has been all night. He has not slept in a while, yet he nevertheless yawns a lot less than you will if you watch this show.

That's the thing about movies and TV shows that cover the same familiar ground over and over again. It just gets repetitive, which in this context is another word for dull.