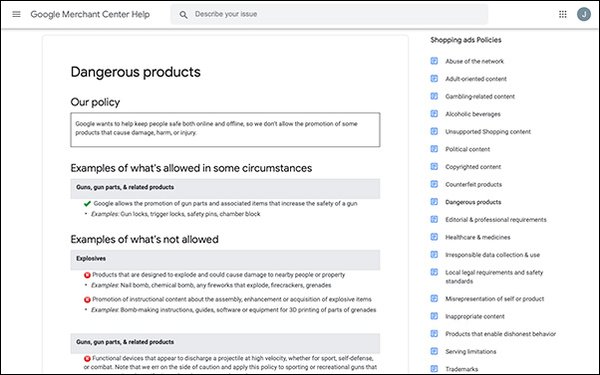 Google continues to sell boxes and accessories for shotgun rounds and rifle magazines following three mass shootings that took place in Ohio, Texas and California during the past couple of weeks.

The online marketplace did remove gun-related products like “the $31.25 20-round Hornady Critical Defense set,” which could hit a “man-sized target at seven yards.” Ads for products like this one, posted to Google Shopping as recently as Monday, violate the company’s policies, but were somehow missed.

“Our hearts go out to the victims of gun violence. The sale of weapons, guns, and certain gun parts is strictly prohibited on Google Shopping,” a Google spokesperson told Search Marketing Daily. “As soon as we found policy-violating results, we removed them and are working to prevent these instances from reoccurring.”

Google banned weapons-related listings on Google Shopping in 2012. Its policy does not permit retailers to sell anything on the site that can “cause damage, harm or injury,” such as explosives, guns, and any part that is necessary to make a gun work like ammunition, clips, silencers, and belts. Airsoft guns, paintball guns, and bb guns are also on the list.

Listings are enforced and flags are set up to identify policy violators. Manual checks also are carried out, but sometimes the listings get through.

Retailers are still allowed to sell holsters and boxes to house ammunition, even shell casing reloaders. A search on Google Shopping, however, returns listings such as the Ammo Nemesis, a holster that can hold extra ammunition sold at DeSantis Gunhide, a RCBS bullet reloader for shell casings sold at MidwayUSA, a MTM Product case that can store 100 rounds of rifle ammunition at Cabela’s, and a 50-round ammunition box also sold at Cabela’s.

Google.com and Bing.com search results are not as easy to regulate -- at least for now. Searches on the words “guns for sale” or "ammunition" on both search engines return a plethora of sites selling both because the words appears on the retailers’ websites. The geolocation on the mobile phone or IP address linked to a desktop used to conduct the search now also lists the closest locations.

Google and Bing remove content from search results in some cases. Google removes the content if it includes child sexual abuse imagery and removes content in response to valid legal requests, such as copyright notifications that meet the requirements of the Digital Millennium Copyright Act.

Maps on both search engines also give the person who is searching addresses and directions detailing how to get to each location returned in the query.