Detroit Chili's Targets Stressed Families By Busing Them To Dinner 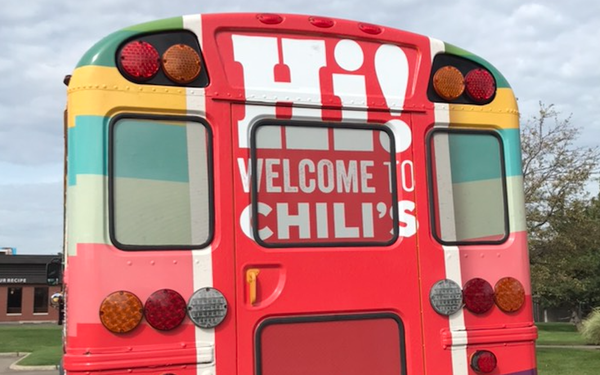 Chili’s rewarded a select group of its loyalty program members in Detroit on Wednesday by treating them to a free dinner together. The promotion originated with a survey showing that Detroit is one of the most “stressed out” cities in the country.

The event came 18 months after the restaurant chain simplified its My Chili’s Rewards loyalty program, which had been integrated with Plenti, which American Express created in 2015 and shuttered last year.

Chili’s sponsored a survey with Wakefield Research in which 57% of respondents in the Detroit area said their families don’t spend enough time together and 82% don’t sit down to dinner as a family each night.

“We understand the stresses families face every day,” says Ellie Doty, who was promoted on Monday to senior vice president and CMO at Chili’s, and whose background includes stints at KFC and Taco Bell.

Chili’s reached out to members of My Chili’s Rewards in the Detroit area based on such factors as availability and the location of schools in which they have children. About 25 people in all participated.

A Chili’s-branded school bus picked up parents at their homes and then stopped at four schools in the Detroit area to collect 10 kids. All were driven to the city’s sole Chili’s location for a free dinner, and taken to their homes afterward.

Other elements of the movement by Chili’s to bring families together at its restaurants include free dinner once a week for one family for year, via a sweepstakes presently running on Facebook.

Chili’s rolled out a refresh of My Chili’s Rewards in March of 2019 based on feedback showing that people wanted less complicated ways of being rewarded than keeping track of points that could take a long time to represent meaningful value. Under Plenti, My Chili’s Rewards members could amass points for use at retail stores and gas stations.

Now, members of My Chili’s Rewards are eligible for free chips and salsa or a nonalcoholic beverage on every visit to participating locations or by using the chain’s To Go ordering system.