A Glimpse Into Bloomberg's Million-Dollar Campaign Strategy On Google Search 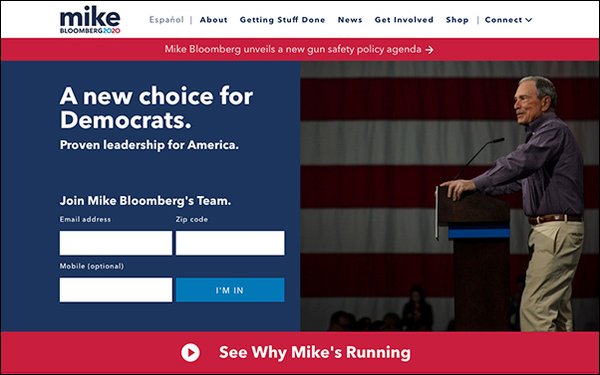 Michael Bloomberg spent at least $1 million on search advertising for ads running across Google's search engine just after announcing his entry into the presidential race.

An estimated whopping 5,600 keywords brought searchers to mikebloomberg.com via Google’s top 100 paid-search results in November 2019. Keywords that were bid on include the typical words and phrases like “donald trump,” “trump news,” “bloomberg,” “trump approval rating,” and “foxnews.com.”

SEMrush analysts pulled and analyzed search keywords for three websites — mikebloomberg.com, elizabethwarren.com, and donaldtrump.com — to determine which keywords each campaign strategy bid on in November 2019.

The keywords were ranked by search volume to allow the analysts to estimate the amount of ad spend for each based on the current search volume and cost per click (CPC) estimates.

For example, the mikebloomberg.com campaign in November bid on the term “donald trump” based on an average monthly search volume of 5,000,000 at an estimated traffic cost of $462,950.00. These are estimates.

If a campaign manager bids for the keyword, the searcher will see the ad if the site wins the bid auction.

SEMrush only predicts the estimated traffic cost in terms of keyword volume or CPC, but in real life the ad campaign should have a budget and other limits that determines the outcome. These numbers only are meant to highlight ad trends and ad strategy of the three websites.

Spikes in traffic from Google Search to these three websites during October show visits, compared with the previous month, grew 35.47% to 2 million for elizabethwarren.com. Visits grew 57.23% to 10.3 million for donaldtrump.com. Visits grew 132.60% to 9,100 for mikebloomberg.com.

In November those traffic numbers from Google Search to each of the websites changed to 2.3 million for elizabethwarren.com, 8.5 million for donaldtrump.com, and 175,700 for mikebloomberg.com.

Once searchers reached mikebloomberg.com, they visited an average of 1.69 pages per visit and stayed for on average of about three minutes and eight seconds.

Donaldtrump.com visitors looked at about 2.01 pages per visit and stayed an average of two minutes and twenty-five seconds. Bounce rates for the three sites, respectively, were 75.56%, 71.82%, and 73.34%.

SEMrush does not endorse any politicians and is not related to any political parties or movements. The data was pulled from its Advertising Research tool and is publicly available to anyone who has a SEMrush account.