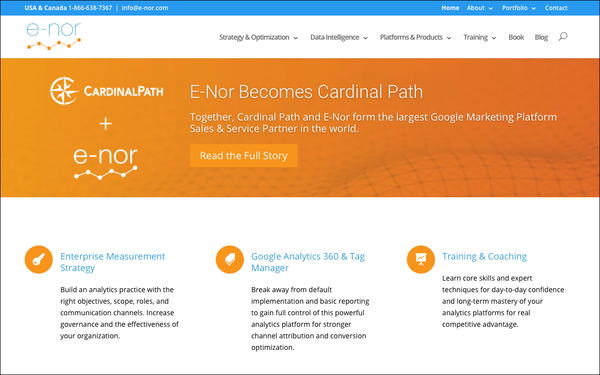 The company believes the acquisition will make Cardinal the largest Google Analytics 360 reseller and services business in the world.

“E-Nor has really exceptional talent who fit in well with Cardinal Path,” he said. “When you’re implementing these technology stacks these things could be really complemented. If you get it wrong the failure could be catastrophic.”

Koberg said E-Nor has built impressive tools around privacy awareness that can help companies to avoid pitfalls. He also said that several years ago, Cardinal and E-Nor deployed an analytics implementation with the U.S. federal government that collectively manages thousands of websites.

Joining the group are Feras Alhlou, CEO at E-Nor, and nearly 50 employees across North America and the Middle East who support companies such as Salesforce, Blue Cross Blue Shield, and Accenture, as well as government agencies and organization such as the U.S. State Department and the Environmental Protection Agency.

E-Nor also focuses on Salesforce integrations and the work they have done with the Google Cloud -- two offerings in high demand across Cardinal’s clients.

“Google and Salesforce make incredible software, but they struggle with the integration of the products,” he said.

Koberg also pointed to other areas where this acquisition makes sense for Dentsu’s network of agencies, such as with Merkle, where the company provides identity resolution and management. It makes the difference between buying the software and leveraging it successfully. Buying the tools isn’t enough. They need to know how to fill them up with the proper data and deploy them.

"Privacy awareness, driven by consent, and all the regulations will make us better marketers," Koberg said. "Even the announcement by Google and the elimination about third-party cookies. We will see that instead of relying on third-party lists, cookies and vague generic demographics that only really point at devices and not people, will force companies to develop direct relationships with consumers."