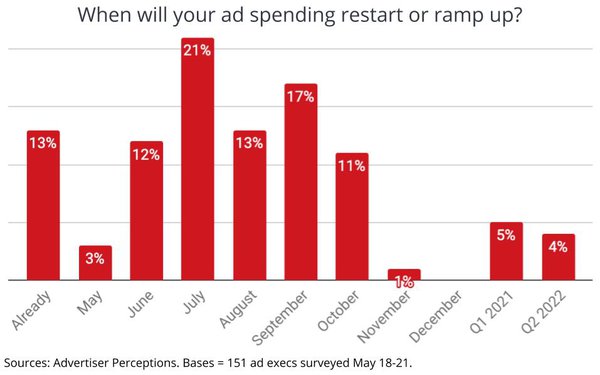 New tracking data suggests that U.S. ad spending has indeed hit bottom and is beginning to rebound effective this month. The new data comes from the fifth wave of ad executive polling conducted by Advertiser Perceptions to measure the impact the COVID-19 pandemic has had on ad spending, strategy, messaging and tactics.

The data shows that May was the low point of among respondents ramping up ad spending and that June through October are the biggest rebound months, especially July (21% citing), suggesting the third quarter is the effective rebound for the U.S. ad economy.

“Advertisers are restarting in a crowded space with lots of moving parts -- product launches, an election, and competitors trying to make up for lost time," says Justin Fromm, executive vice president-business intelligence at Advertiser Perceptions, adding: "They’re prepared to explore alternatives to tent-pole media they had originally planned, and they need help balancing the nuances of timing and pricing that regional differences present.”

And while Advertiser Perceptions characterizes the upturn as a "restart" to the ad economy, the tracking data echoes the finding of another recent survey of ad executives conducted by the equity research team at UBS, which showed that the ad economy may already have hit bottom in April and began an upward correction beginning in May.

In either case, the ad-executive tracking reflects the most current sentiment in what is an extraordinarily volatile marketplace that likely will be in constant flux until the pandemic is under control, especially to industries most prone to disruption.

According to the most recent Advertiser Perceptions findings, only 29% of ad executives say they have a "strategy in place" to deal with the "new normal." 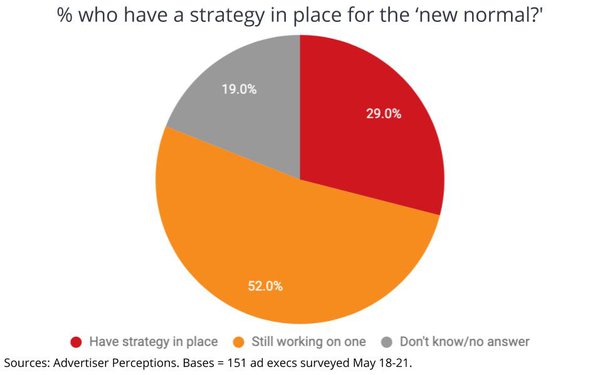