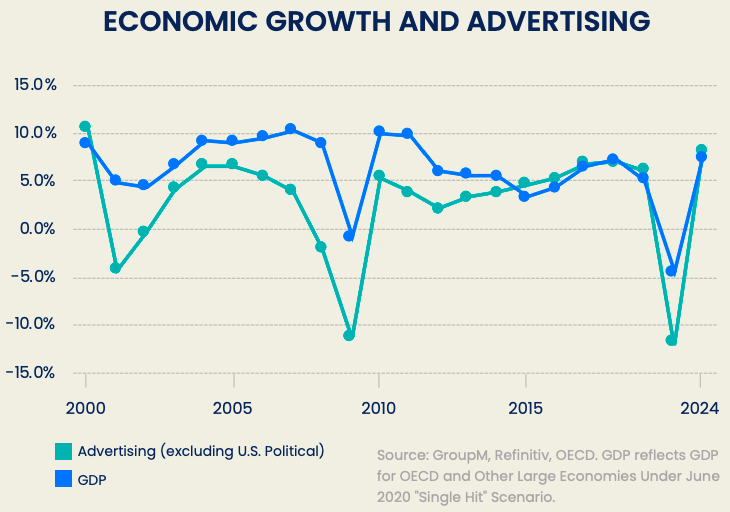 The global advertising economy will shed $70 billion this year and will fall 11.8% (excluding U.S. political advertising) to $517.5 billion, according to the latest forecast by GroupM. (Including political, the drop will be 9.9%.)

A year ago when the firm issued its first forecast for 2020, it expected to see healthy growth of 4.8%. By December, seeing some weakening in the global economy, the firm pared back the growth estimate to 3.9%.

Now, of course, the pandemic has shredded the economy worldwide, leading to the firm’s much more negative reassessment and driving total advertising back down to approximately 2017 levels.

The good news: GroupM expects a partial rebound next year, when advertising growth is expected to reach 8.2% to nearly $560 billion. The firm expects 4.7% additional growth in 2022 which would bring total advertising back up to where it was in 2019 -- $586-plus billion.

Next year, GroupM estimates that half of the top-10 markets will grow by double digits, while the other half will grow by single digits.

According to the GroupM report, the declines this year will be relatively less pronounced in the top-two ad economies -- U.S. and China -- which combined account for more than half of the world’s total advertising activity.

Conversely, several mid-size or larger markets are expected to decline by more than 20% this year, including Brazil, Spain, India and the Middle East and North Africa region.

By sector, outdoor digital media will account for $9 billion or 31% of the total in 2020. Digital extensions of traditional television are estimated at $12 billion this year -- 9% of that medium’s total.

Digital advertising is expected to decline by 2.4% in 2020 to an estimated $278 billion, while the medium’s global share will climb to nearly 54% from 48.5% in 2019.  This follows nearly a decade of double-digit growth, with many years exceeding 20% at a global level.

Search ads will account for $109 billion of the digital total, falling 2.6%. Other forms of digital advertising that account for $172 billion (excluding digital extensions of traditional media) will fall by 0.6% this year.

Television advertising is expected to decline by 17.6% in 2020 (excluding U.S. political) before rebounding a bit next year with projected growth of 5.9%.

Digital extensions and related media, including advertising associated with traditional media owners’ streaming activities as well as Hulu, Roku, and others will fare better with growth of 3.7% this year and 11.3% next year -- around 9% of total TV spending this year.

Out-of-home advertising is expected to decline by 25%, including digital out-of-home media but next year GroupM expects a partial rebound with 14.9% growth.