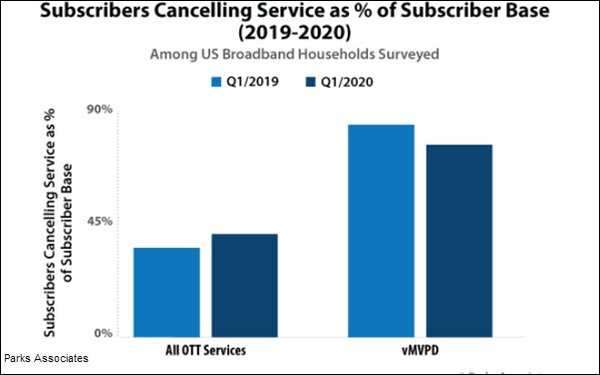 The churn rate for paid subscription-based OTT services as a whole hit 41% during this year's first quarter — up from 35% in Q1 2019 — driven in part by increased sampling resulting from more choices and more free-trial offers, according to the Parks Associates research firm.

Virtual MVPDs’ churn rates — defined as the number of subscribers canceling as a percentage of the subscriber base —.actually declined a bit during the period, but remained far higher than the OTT services’.

More than two in five of U.S. broadband households have now trialed an OTT service, and 8% have trialed four or more, according to Parks’ new report on the impacts of COVID-19 on OTT.

The most cited reason for subscribing to an OTT service (chosen by nearly 30%) is having wanted to watch a specific program or event. But being offered a free trial, and enjoying the service and deciding to keep it, are close behind: 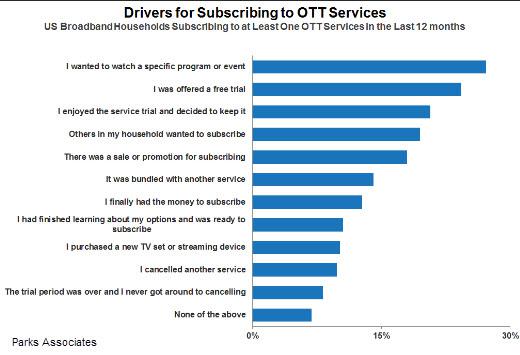 “We are seeing a record number of consumers experiment with new OTT services as a result of the COVID-19 crisis and the shifts in strategy in the industry,” says the firm’s Research Director, Steve Nason, noting that services are offering extended free trials to build engagement in the hope of driving conversions.

Among new subscribers, 49% subscribed to Disney+ and 27% subscribed to Apple TV+, indicating that conditions created by the crisis helped these services quickly increase their subscriber base since their launches in November 2019, says Parks.

Indeed, Parks found that a quarter of U.S. broadband households now subscribe to Disney+, and nearly one in 10 subscribe to Apple TV+, making them the fourth and fifth largest SVOD services, respectively, after less than six months in the market.

Not noted by Parks: It speaks to Disney+’s brand and offerings strength that it never felt the need to offer an “extended” free trial — and has now dropped its 7-day free trial completely, depending instead on blockbuster offerings like the filmed version of “Hamilton,” debuting July 3, to drive new signups.

However, paid OTT services will face increased competition from free, ad-supported services due to high unemployment and the looming end of extended unemployment benefits.

That may confirm the wisdom of hybrid offerings -- including NBCUniversal launching Peacock with both paid and free subscription tiers, and WarnerMedia's plan to follow the HBO Max SVOD launch with a less expensive, ad-supported offering next year.

Parks also notes that a decline in shelter-at-home and less time to watch TV could cause more SVOD subscriber falloff (although the way things are going, much of the country could be back on quarantine soon).

SVODs are also highly dependent on new content to drive new subscribers and maintain existing ones — but hamstrung at present by the pandemic-driven halt of content production.

“Major players like AT&T for Warner Brothers and Comcast for Universal Studios are greatly concerned about the delays in content production on the launches of new services, like HBO Max and Peacock,” says Nason.

“OTT services need to be creative in building an engaging service, but during this time of heavy video consumption, they have the opportunity like never before to win over new video consumers and retain them as long-term subscribers,” Nason concludes.