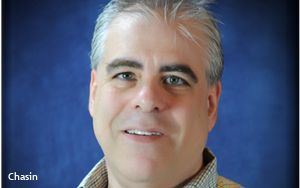 It is often said, “You are judged by the company you keep,” and Josh Chasin has joined an elite group in earning one of the industry’s highest honors -- the Advertising Research Foundation’s 2020 “Erwin Ephron Demystification Award” -- whose previous recipients include Leslie Wood, Jim Spaeth, Dave Poltrack, Irwin Gotlieb, Bill Harvey, and Chasin’s former Comscore boss, Gian Fulgoni.

Chasin, who in March joined VideoAmp as its first Chief Measurability Officer to help leverage better ad solutions, spoke with me recently about his love for and admiration of Erwin Ephron, as well as a variety of industry research issues.

Groundbreaking initiatives and career highlights
Chasin was at the Arbitron radio ratings company for many years, rising through the ranks quickly. His first real understanding of the importance of “demystification” in the weird world of media research and audience ratings was in more simply and concisely articulating Arbitron’s fundamental methodological quality and benefits versus Birch Radio. Birch was clobbering them at the time because they could synthesize their benefits in minutes versus hours.

Once he understood the essence of what became one a favorite Erwin saying, he won agency after agency back to Arbitron. It related to understanding the importance of ad propinquity and the purchase cycle for cereals. “When the box is empty!”

At Comscore, Chasin and the team were wrestling with the incompatibility of user (panel) versus server internet usage data. It was then that Chasin remembered his reference at an ARF presentation to the “integrated approach” to audience measurement that out-of-home media had embraced in the UK.

This innovative approach was established as straight surveys were not delivering the depth of OOH display panel data needed, so multiple surveys and data sets had to normalized, calibrated, and merged to provide ratings. Voila! comScore developed a unique integrated approach with hybrid measurement for online audiences by melding the user and server data together.

The top burning media research issue today: Cross-Media Platform Measurement
Understanding media’s impact on the desired outcome (ad effects) is likely “migrating from audience ratings to an addressable-based model,” Chasin says. Such a measurement and analytics model “will focus on the delivery of impressions to devices and to screens which must be viewable.”

The WFA is in the process of attempting to better understand this measurement process. The “trick” in cross-media analytics is in putting comparable impressions from a diverse array of media and devices involved a campaign together.

The impressions as measured for different media platforms by different research vendors are generally defined quite differently, so understanding just how it all works together is extraordinarily complex.

Notably, Chasin suggests that “the industry has been putting incompatible impressions of different media together for years” -- essentially in an attempt to estimate the fundamentally important reach of the target.

The breakthrough by out-of-home posters in measuring Eyes-On or ad exposure versus simply circulation or ad delivery (“viewable impressions”) did not drive other media or media agencies to embrace that significantly higher value of impressions as a common currency.

“No one is talking about Eyes-On today,” Chasin says, positing that “the measurement challenge is profound.”

Ad exposure to an audience (versus mere impressions) -- the measurement of creative though a pipe to a screen in front of a person -- is now probably too difficult to measure across so many linear and digital paths delivered in so many ways on so many devices.

Chasin's point of view has long been that “the most complex area in digital measurement is in the last two feet from the screen to the face. It's illusive!”

Is the industry moving backwards to household data targets and devices in order to move forward?

In view of the extent of household attributes data, ad targets may well be defined by households and their consumption rather than by people.  In addition, “delivering creative to a household will be typically reflected by a cluster of devices with the same IP address,” Chasin says.

Chasin sees reinventing measurement, understanding measurability and thoroughly tracking addressable devices as the keys to better understanding the impact of a campaign on a desired outcome.

Interestingly, he believes the improvement in collaboration from walled garden's data sites is also helping to “put it all together.” He also warns: “Don’t lose the focus and value of insights by being too enamored by Big Data.”

Media's primary responsibility is to deliver ad exposure. What happens to that metric if we move to just measuring ad outcomes?

We agreed it would take a MediaPost workshop fully address this issue, but Chasin believes that attribution models that are focused on advertising outcomes “could provide feedback to determine whether the ad makes it to the ears or the eyes. Such models, he said, "may or may not be appropriate but could indeed be missing key insights.”

If he is correct, this raises a further question -- can we skip measurement of the series of levels in the hierarchy of the ARF’s “Making Better Media Decisions” that address vehicle distribution; vehicle exposure; ad exposure; ad attentiveness; ad persuasion; ad communication; ad response; sales response (or outcome)?

I am sure Erwin would have echoed Chasin's concern regarding the potential insights to media planning, buying, and selling that measurement of each of those levels could provide.

If you want to understand Chasin even better, his answers to Bernard Pivot’s classic 10 “character questions,” as used by the late James Lipton in "Inside the Actors Studio," are perhaps the most revealing. Here are a few.

What is your least favorite word?
“Viewability.”

What sound or noise do you love?
“It’s tough to beat bacon frying.”

What profession other than your own would you like to attempt?
“Rhythm guitar in a bar band.”

If Heaven exists, what would you like to hear God say when you arrive at the Pearly Gates?
“What are you doing here so early?”