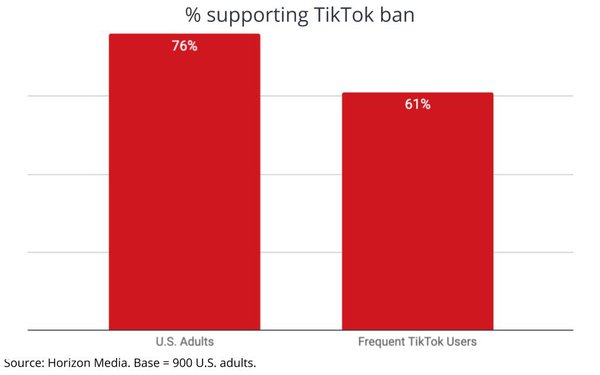 Americans overwhelmingly support a U.S. ban on TikTok, including -- surprisingly -- more than half of frequent TikTok users, according to a consumer tracking study released this morning by Horizon Media.

The poll of 900 Americans found that 76% support a TikTok ban. Interestingly, 23% said they support the ban regardless of who owns it, including a U.S. company like Microsoft.

Horizon also conducted an analysis of social media conversations related to the ban and found there is "more to the story," including the fact that most users (62%) simply don't trust TikTok to secure their data. They rank TikTok as the "least trustworthy" of five social media apps surveyed, including Facebook, Twitter, Instagram and Snapchat.

"Chief among the issues is a distrust in a country like China, who has reportedly hacked the U.S. in the past, to protect user data (80%) and a belief that TikTok should be owned by a U.S. company — like Microsoft (63%; 72% among 18-34 year-olds)," the Horizon report notes.

The study, however, also found that many Americans (60%) is "the first step towards banning other things they care about even more."

The report also makes the case for an American company like Microsoft acquiring TikTok and turning things around, but it concludes by advising brands that it may actually be a good time for them to begin utilizing TikTok.

"Brands who are already tapping into TikTok may not need to worry about negative consequences of the potential ban, and in fact, it may be a good time for brands who want to reach younger consumers to dip their toe in if they haven’t used, or advertised on, TikTok already," the report says, adding, "The potential purchase by a U.S. company seems to only bring more upside, so TikTok advertisers — and potential advertisers — should keep an eye on the quickly-evolving situation."