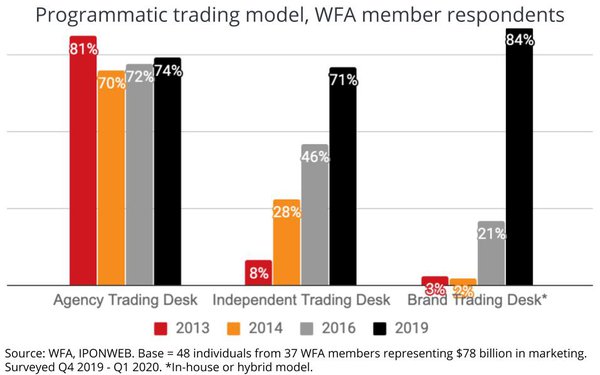 The world's biggest advertisers have largely embraced programmatic media-buying, and increasingly have shifted to independent and/or in-house trading models with the primary effect being greater transparency in terms of the actual cost of acquiring inventory. That's the finding of a just-released survey of member of the World Federation of Advertisers, the fourth in a series of studies first benchmarked in 2013.

The report, "Programmatic Data & Technology: Wave 4," finds that the percentage of WFA respondents utilizing a "Brand Trading Desk" -- one managed in-house or via some form of hybrid in-house model -- has soared to 84% currently versus only 3% in 2013.

The study also found that the percentage of members shifting to independent trading desks rose to 71% from just 8%, while the number utilizing a conventional agency trading desk declined to 74% from 81%.

The percentages are not shares of a total, because the models are not necessarily mutually exclusive, but the direction is clear: the world's biggest marketers are becoming more sophisticated about programmatic media-buying and are increasingly moving to models that give them more explicit control, as well as transparency.

Asked to describe the "operating model" of their current trading desk method, 57% say they now have a "transparent" model that fully discloses the cost of acquiring programmatic inventory from end-to-end, vs. just 53% three years ago.

Importantly, regardless of their explicit model, none of this year's respondents described theirs as "non-transparent" or non-disclosed vs. a third who described it that way in 2016.

“Advertisers have been on a steep learning curve with the arrival of programmatic, but many are now taking greater control of the process through an expanding mix of in-house, hybrid and agency models," WFA Director of Asia Pacific Marketing Services Ranji David noted in a statement, adding: "Whichever model they choose, transparency of the supply chain is critical so that they can assess which elements are contributing to their business growth and marketing ROI."

The study, conducted in collaboration with programmatic trading technology developer IPONWEB, is based on a survey of 48 individuals from 37 WFA member companies representing $78 billion in annual marketing spending. 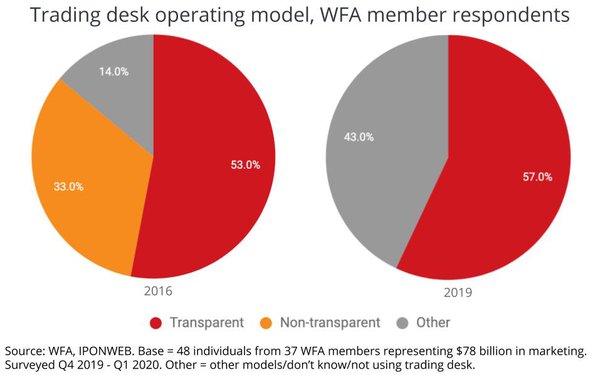