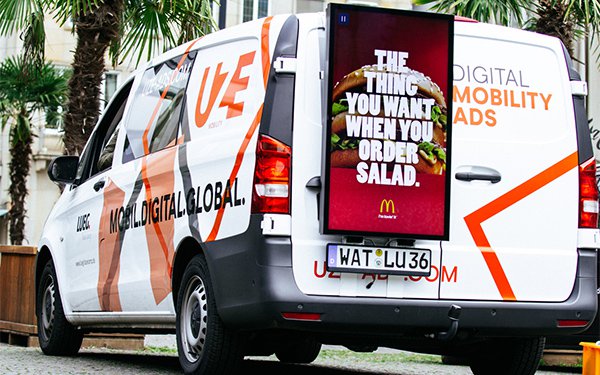 UZE Mobility, a mobile marketplace platform for out-of-home advertising, has debuted in the United States. The company was founded by mobility expert Alexander Jablovski, a veteran in the automotive industry who worked at Daimler AG and is expert in mobility.

“I’ve always been excited by big challenges,” she said, adding that she leaned to code software at the age of eight. “I like standing at the bottom of the mountain looking up, trying to figure out how to get there.”

The company believes advertisers can offset the cost of deliveries by allowing brands to buy media online, run campaigns, and produce reports that support performance. Jeffers said in the U.S. there are more than 17 million commercial vehicles. The idea is to make advertising less expensive to buy by putting the ads on commercial vehicles.

The platform was built to allow online advertisers to port their creative from online to out-of-home and manage all types of media together. The real-time reporting would allow marketers to adjust budgets as needed. The marketplace software is intended to connect with the platforms of advertising agencies, SSPs, and DSPs, deploying the creatives to the displays out in the field.

The displays have the ability to gather data through sensors, giving UZE the ability to change target in real-time. Advertisers can set up parameters and targeting, adjusting budgets and for where vehicles are running in real-time based on factors like time of day and weather.

Pampers, which is marketed by Procter & Gamble, wanted to target advertisements in residential areas and new developments in Germany, where UZE Mobility initially launched, but couldn’t find the billboards to advertise on. They discovered DHL ran the routes in those neighborhoods, so they connected with the carrier to put the display on one of their delivery vans.

Jeffers sees the possibilities in mobility through UZE’s technology, which relies on artificial intelligence and sensor technology.

The company initially launched in Germany, where UZE partnered with Hövding, for to promote their mobile airbag for bikers. After running a bike with a large screen through bike lanes in Berlin, Hövding saw web sales jump to 38%.

UZE began offering the service in Manhattan, with plans to expand across the U.S.