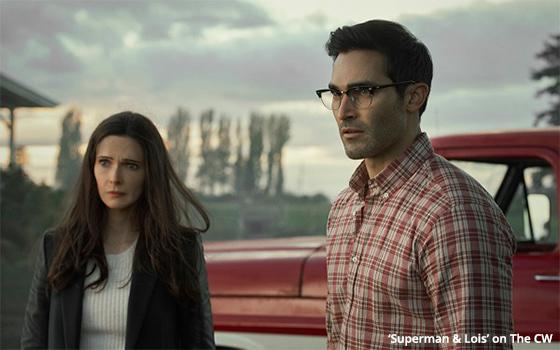 You would think that the movie and TV industries had long ago mined everything they could from the Superman story, but guess again.

The strange visitor from another planet who can leap tall buildings in a single bound flies back onto TV this week in a whole new series that positions him as a husband and father.

In the show, titled “Superman & Lois,” Clark Kent is in his late 30s or early 40s and married long enough at this point in his life to have two teenage sons -- non-identical twins -- with his wife, Lois Lane, a colleague at the Daily Planet newspaper in the city of Metropolis (which in this show, seems to be Chicago).

The two titular characters are played by Tyler Hoechlin and Elizabeth Tulloch (pictured above).

The two-hour premiere of the show slotted for 8-10 p.m. (Eastern) on The CW this coming Tuesday introduces this “Superman” story’s main preoccupation.

In short, Clark and Lois are concerned that one or both of their boys -- both of whom are half-Kryptonian and half-Earthling -- may have inherited some or all of their father’s superpowers, along with all of the responsibilities that will eventually go with them.

Just to be clear here, Clark’s wife Lois knows all about his secret identity as Superman. And so does her father -- a high-ranking U.S. military official (a general of some sort) who has the Man of Steel on speed-dial and is able to summon him at a moment’s notice in case of emergencies (which happen often).

Unlike the traditional “Superman” story in which (if memory serves), the superpowers of the tot who would become Superman were evident from his very early boyhood, the possibility that either of the two twins -- Jonathan (Jordan Elsass) and Jordan (Alexander Garfin) -- are endowed with similar abilities is not yet apparent.

However, there are hints that powers of an unearthly sort are beginning to emerge in these teens, which makes this “Superman” story a coming-of-age story about two teen boys -- both about to begin their freshman year in high school -- who are about to enter a critical stage in their emotional and physical development.

In this way, “Superman & Lois” emerges as a new “Superman” TV show in which the focus is not entirely on the superhero and his wife, but also on the stories of their two teenagers -- which is a wholly clever and appropriate construct for a new drama on the teen-focused CW.

The makers of “Superman & Lois” have shrewdly created their two teen characters to cover all the bases. One of them is a charismatic, extroverted jock, while the other is an introvert who is melancholy and brooding, and answers his parents in dull monosyllables.

In fact, based on the series’ premiere, the title “Superman & Lois” is almost a misnomer. A more accurate title might have been “Superman & Sons” or perhaps “Superman: The Next Generation.”

Whatever the title, the opinion here is that this is a very good new “Superman” show. The premiere episode more than held the TV Blog’s interest from beginning to end, although nothing in this column’s history would ever indicate a patience or affection for superhero TV shows.

But perhaps Superman is the exception. He was always the greatest of all superheroes, not only possessing powers and abilities far beyond those of mortal men, but also beyond all other superheroes as well. May Superman and his sons live long and prosper.