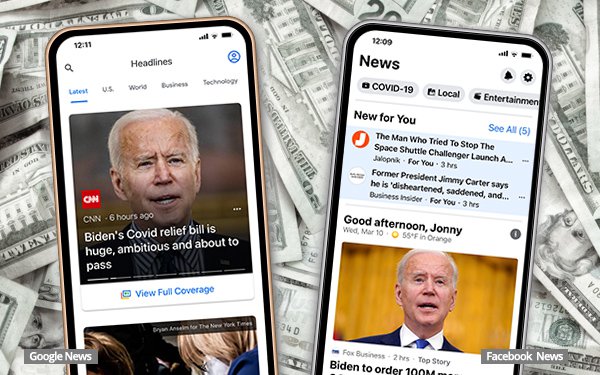 A U.S. bill being introduced Wednesday by U.S. lawmakers would make it easier for news organizations to negotiate collectively with platforms like Google and Facebook to get a better price for their content that serves up in search engines or news feeds.

“This bill will give hardworking local reporters and publishers the helping hand they need right now, so they can continue to do their important work,” Cicilline said in a statement.

More people are getting news from online sources, but the bill would include sources from print and traditional broadcasting, too, according to Reuters. The ability to access news by those seeking information in search engines and social media feeds has increasingly become a draw to platforms.

For many, this bill is not a surprise. It comes soon after Google’s and Facebook’s battle with the Australian government over how much publishers should make from their content in search queries and news feeds.

At one point, Facebook declined to include news content from Australian publishers in its news feed after the country’s house of representatives passed the law — which at the time was draft legislation — requiring social media companies to negotiate payments to media for using their content.

The social media site agreed to restore the content once the government granted concessions. It also promised a $1 billion investment in the news industry.

Google also struck a content deal with Australian news publishers after initially rejecting the part of the bill that would require it to have an arbitrator to negotiate a price if Google could not come to an agreement on its own. The move pays Australian publishers for their news content that serves up and made searchable in News Showcase, a product Google launched in late 2020.

Some of the initial publishers included The Canberra Times, The Illawarra Mercury, The Saturday Paper, Crikey, The New Daily, InDaily and The Conversation.

Microsoft in early February lobbied for other countries to follow Australia's lead in calling for news outlets to be paid for articles published online in the United States, Canada, the European Union, and other countries.

“The United States should not object to a creative Australian proposal that strengthens democracy by requiring tech companies to support a free press,” Microsoft President Brad Smith wrote in a blog post. “It should copy it instead.”

In a statement Smith explained why Microsoft fully supports proposed legislation in Australia that would force Google, Facebook and others to compensate media for their journalism.

Smith listed several questions that he called “pressing” that were directed at the Biden administration, and explained how Facebook and Google persuaded the Trump administration to object to Australia’s proposal.

With a pending bill expected to be introduced today, U.S. lawmakers involved in the process feel confident this will pass any hurdles.