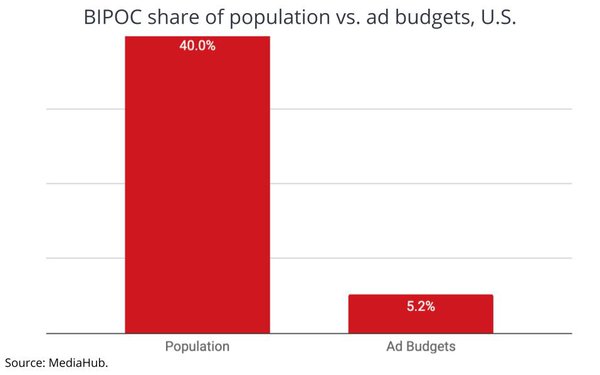 Citing the need to close the gap between the share of ad spending targeted at people of color and their share of the U.S. population, Interpublic's Mediahub this morning unveiled plans for a "Diversity-Owned Media Day" on Thursday.

The New York-based agency said the event is "designed to resemble a virtual dinner party with dynamic and free-flowing discussion," and will feature a variety of BIPOC (Black, indigenous and people of color)-owned media suppliers, including multicultural publishers and platforms, as well as the agency's media planning and buying teams.

“Over the last year, we have been working hard to challenge and address the racial, ethnic, identity, and gender inequities in our industry,starting with tackling the internal systems within our own house," Mediahub Executive Vice President-National Investments Carrie Drinkwater said in a statement, adding: "Using our collective position in the marketplace, we also have the opportunity to influence and impact change externally, particularly in shifting perceptions and media dollars to support a more diverse range of publishers- and in doing so, connect more authentically with what has become a more diverse and multicultural mainstream."