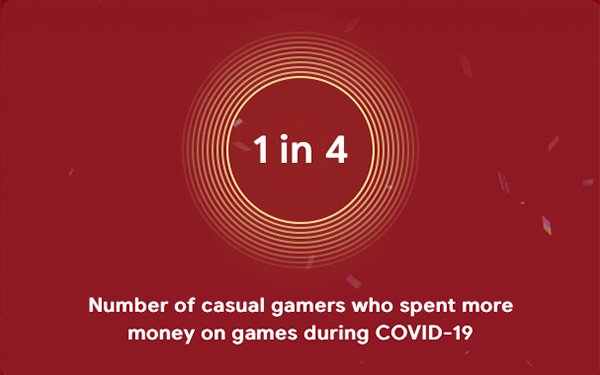 Gaming became a major pastime and a way to socialize during the past year amidst social distancing and lockdowns.  Google identified this trend through the increases seen in search terms and downloads, especially early on, from January to June 2020.

When it came to querying game-related questions in Google search, gamers asked the engine to find information on hardware and accessories, and also sought competitive communities. They searched for escapes into immersive genres, and used gaming to learn new things.

The top terms in growth pointed to games related to multiplayer, action adventure, and hard puzzles.

The search term “competitive multiplayer” on Google in the past year rose 70000% -- the highest ranking on Google’s list. Action adventure games and hard puzzle games came in at No. 2, growing 1000% each.

It turns out gaming isn’t just for gamers. People also like to watch gaming. The report points to communities that have become more interconnected outside of the games by creating and consuming related content.

On YouTube, gaming content continues to grow. Globally, there were more than 100 billion watch time hours of gaming content and 40 million active gaming channels on YouTube between October 2019 and September 2020, according to the report.

All types of game genres are growing, but some much more than others. Searches for action adventure games grew 1000%, while word puzzle games for adults grew 500% and games related to mmorpg open world, music games, word search, and block puzzle have each grown in searches by 400%.

Keeping gamers engaged is important. Top games have a 45% higher day-seven retention rate than the industry average, meaning that they retain their community by understanding the different preferences.

How can developers keep gamers engaged? Key shifts in game engagement globally include tactics within the game and the community surrounding it.

Other key statistics include:

A Google survey found gamers were more willing to pay for gaming content as they sheltered in place. This spend is increasing in areas that deepen connections within the game, such as: