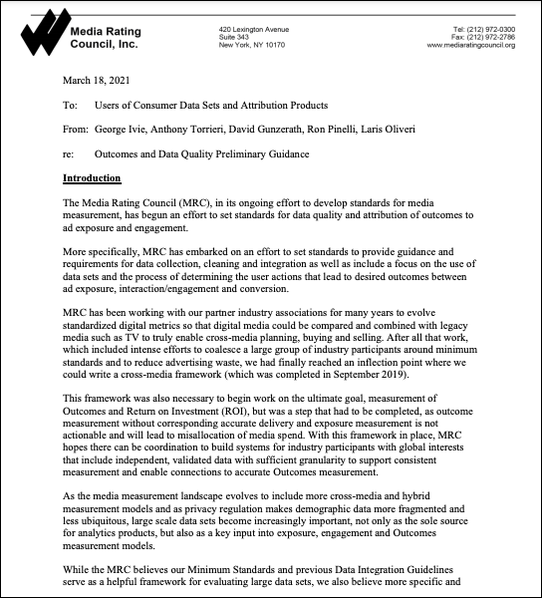 The Media Rating Council (MRC) this morning unveiled initial findings of an ambitious initiative to establish an industry standard for “outcomes” based measurement and its conclusion may be that there is no single method for measuring it.

Instead, the MRC said it will likely shift gears to focus on the “quality” of data used, as well as important disclosures on their “capabilities and limitations.”

Details of the initial findings can be reviewed in a memo published by the MRC, but it also concludes that while a universal industry standard may not be attainable, the current state of outcomes measurement processes is “largely opaque” and that the industry is “in need of much greater transparency.”

As a result, the MRC implied its primary role will be to ensure greater disclosure of methods, data and processes to enable a buyer-beware approach to utilizing various outcomes measurement solutions.

“The MRC’s Outcomes Standard can be expected to include rigorous requirements for methodological and other disclosures to better enable users of the measurements to understand and interpret the end results,” the MRC said in a statement announcing the initial findings.

Unlike conventional audience-measurement metrics that have historically been audited and accredited by the MRC, the council had sought to develop a new standard that went beyond so-called “inputs” in order to measure the “outputs,” or the effects of media exposure on the audiences they reach, such as brand lift, actions, sales, etc.

“These preliminary findings will serve to inform the direction of the outcomes standards initiative as it moves forward over the coming months,” the MRC stated, adding that the working group will continue to meet to finalize a draft document that will be released to the industry later this year.