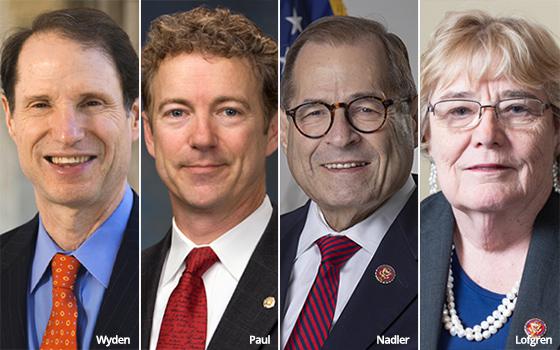 The “Fourth Amendment Is Not For Sale Act,” introduced in the Senate Wednesday by 20 lawmakers including Ron Wyden (D-Oregon), and Rand Paul (R-Kentucky), and in the House by Reps. Jerry Nadler (D-New York) and Zoe Lofgren (D-California), would require government agencies to obtain a court order before buying personal information from data brokers.

The bill would also prohibit law enforcement authorities and intelligence agencies from purchasing data obtained through deception, as well as through violations of a privacy policy or other contract.

“There’s no reason information scavenged by data brokers should be treated differently than the same data held by your phone company or email provider,” Wyden stated Wednesday. “This bill closes that legal loophole and ensures that the government can’t use its credit card to end-run the Fourth Amendment.”

The Network Advertising Initiative on Wednesday endorsed the proposed legislation.

"The nonconsensual sale of consumer data for law enforcement and foreign intelligence purposes is unethical, it poses a serious privacy threat to consumers, and it ultimately threatens the viability of data-driven advertising," President and CEO Leigh Freund stated.

She added that the organization "is particularly concerned about downstream uses of precise consumer location data that could result from these practices."

The self-regulatory group historically has focused on the collection and use of tracking data for advertising -- including delivering targeted ads, ad delivery and reporting.

The recommendations regarding law enforcement came shortly after it emerged that some members were drawing on location data to track people's movements during last year's COVID-19 lockdowns.