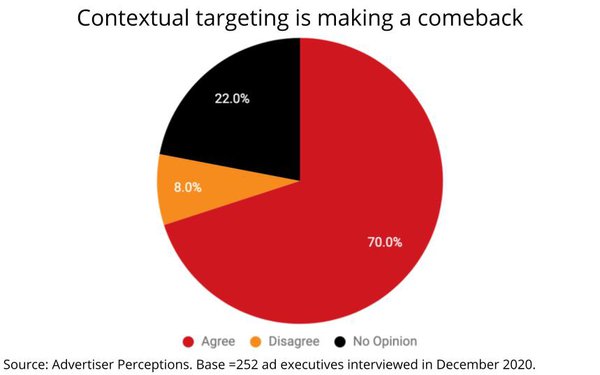 In light of the deprecation of mobile user identity trackers, the vast majority of mobile advertisers and media buyers believe contextual targeting is resurgent.

While contextual targeting has never gone away, it took a backseat to so-called "deterministic tracking" technologies such as the the advertiser identifier (IDFA) that Apple has begun turning control back to iPhone users for. The move is expected to compromise the identity tracking used by social media platforms such as Facebook to target explicit users.

As a result, 70% of mobile advertisers/agency media buyers believe contextual targeting is making a comeback, according to a survey of 252 executives conducted in December 2020 by Advertiser Perceptions.

“Walled gardens, especially the large social platforms, have the resources to adapt to privacy and regulatory changes,” states Advertiser Perceptions Executive Vice President-Business Intelligence Lauren Fisher, adding: “But they need to reassure advertisers with better solutions for brand safety and protections against fraud, in addition to proving their privacy compliance.”

As a result, the study found mobile advertisers are poised to spend more on content environments with overt contextual signals, including gaming, content aimed at children, lifestyle and entertainment content.

"In fact, by the end of 2020, 37% of advertisers had already decreased or discontinued location-based data solutions because fewer consumers were out and about and privacy restrictions loomed," the report notes, adding: "Confidence in the new world of mobile targeting differs by business type. Advertisers promoting online-centric revenue models are more likely to be confident without location-specific data than their brick-and-mortar-focused counterparts – 71% of mobile app businesses and 68% of those selling goods and services online are confident, whereas only 50% of omni-channel sellers and 27% of those representing offline-only businesses are confident."