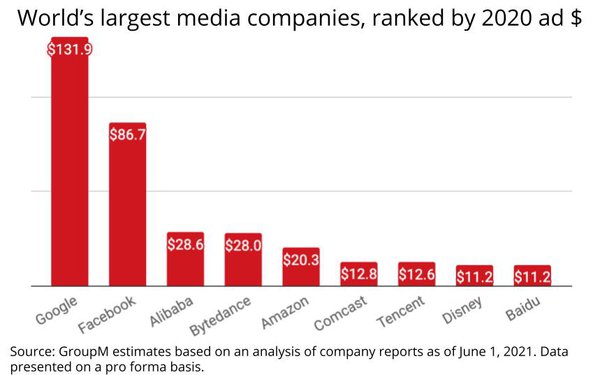 While Google and Facebook remain the world's biggest advertising behemoths, four of China's media companies now rank among the world's top 10, including TikTok owner Bytedance, which barely even existed just a few years ago.

The findings are based on estimates just released by GroupM's Business Intelligence unit, and are pro-forma calculations based on an analysis of advertising revenue estimates from company reports.

The study, which includes a five-year ad-revenue analysis going back to 2016, shows Google's ad revenues nearly doubled in that time, while Facebook's more than tripled -- but the fastest overall growth trajectory came from China's media companies, which now account for about 20% of the advertising revenues from the top 25 media companies in the world. and about 12% of the global advertising economy.

Perhaps the most concerning overall trend for marketers and ad agencies is the fact that the entire advertising industry has grown far more consolidated among the top 25 global media suppliers. Based on 2020 estimates, the top 25 media companies now control two-thirds of all ad spending, up from just 42% four years ago.

"From a marketer’s perspective, one can argue that high and rising levels of concentration among sellers of advertising are not necessarily negative," GroupM Business Intelligence Global President Brian Wieser writes in the report, adding: "Marketers prefer to have many different choices of media owners to work with, but they also like the workflow efficiencies and ease of measurement that comes from having fewer partners.

Moreover, no marketer is obliged to use paid media to build their brands: investments in product, distribution, cultural associations, events, creative executions and owned & operated media properties all provide alternatives for marketers, so long as they choose to invest in them." 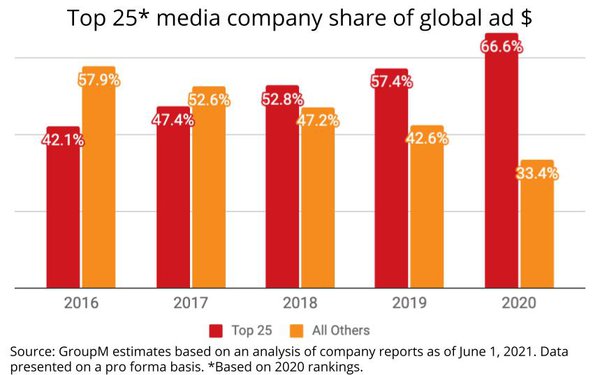